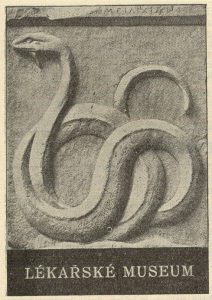 The Physicians’ House (Lékařský dům) was inaugurated in Prague in 1931 as the seat of Czech medical organizations and a medical library. At a meeting of the Council of the Physicians’ House, the directing body of the institution, on February 13, 1934, its Chairman, Professor Frantisek Samberger, proposed that a medical museum be established to collect and preserve the past of the Czech medical profession, in the national or linguistic sense. The proposal was approved and a board of curators led by Viktor Palivec, head of the Physicians’ House Library, was elected.  Repeated requests for donations targeted the Czech medical public and objects, books and archival collections soon begun to accumulate. The founders soon realized that the museum cannot remain a mere memorial house and needs to become a true medical museum, even if still focused on Czech medicine. In 1938, the Association of the Medical Museum was founded with the objective of collecting funds and maintaining support for the museum and its programme.

During the war years 1939-1945 the collections were moved several times, within the Physicians’ House and elsewhere, yet they continued to grow. In the post-war years, the museum was administered by the Ministry of Health and the Central Medical Library, as its primary patron, The Central Union of Czechoslovak Physicians (Ustredni jednota ceskych lekaru), ceased to exist in 1948 and its successor organizations – trade unions and the Czech Medical Association of Jan Evangelista Purkyne – were not able to run the museum or not interested in it. The Medical Museum merely languished and the collections suffered from frequent relocations.

The one hundredth anniversary of the Czech Medical Association (Spolek lekaru ceskych) in 1962 presented an opportunity for the Medical Museum as well, as the medical establishment suddenly recognized its value.  Renamed Czechoslovak Museum of Health Care, the Museum became part of the celebrations and acquired space in a former pharmacy in Parizska street, on Male namesti and in a former church Pod Petrinem. However, as soon as in 1965 the new locations  were taken away and the collections packed in the basement of the Bohnice Psychiatric Hospital,  in a storehouse on Skretova street, in the Physicians’ House and elsewhere. Only one curator was left.

At the end of the 1960s, a group of physicians close to the museum made one more attempt to establish a “Czech Museum of Human Care” (České muzeum péče o člověka), but to no avail. The museum collections found another home in the former apartment of Professor Karel Hubschmann on Vodickova street, but had to leave in 1992 due to restitutions.  Another flicker of hope arose in 1993, when an advisory council of the museum was appointed and the municipality of Prague promised a building on Senovazna street, but lawsuits over the property of the former Socialist Union of Youth buried this chance as well. Negotiations with the First Medical Faculty of Charles University over the use of the Faust House were no more successful.

Finally, in 1997 the Medical Museum found a new home in the courtyard building of the National Medical Library on Sokolska 54. Due to the reconstruction of the neighbouring hotel, the museum needed to move once more and for a few years to operate in two small rooms in the Physicians’ House, but in 2004 it was able to move back, with larger space and better conditions both for the deposits and for research. In the little house in the backyard, the museum collections are finally accessible to researchers as well as general public.