From the Museum Collections

The Medical Museum was founded in 1934, conceived above all as a “monument” of the Czech medical profession and its representatives. Later, the scope of its collections expanded: today, the museum holds objects and documents from all disciplines of medicine, reflecting the history of health care in the Czech countries and Central Europe. The medical and surgical instruments in the museum collections date from as early as the 17th century to the present time.

The Acological Cabinet is at the center of our collection of surgical instruments. The Cabinet was initiated and assembled in 1809 at the Medical Faculty of the Charles University by Professor Josef Antonin Oechy, as a teaching tool for acology, the “science of medical instruments and bandages.” After Oechy´s death the cabinet was administered by Professor Vincenc Julius Krombholz, who described most of the instruments and accessories.

The acological cabinet documents the development of the surgical instrumentarium before the discovery of asepsis. Surgical, gynaecological, urological and dental instruments of barber surgeons, instruments for trepanation and blood-letting with handles and parts of ivory and wood show the original forms of the tools of modern surgery. A brace trepan, resembling a carpenter’s brace, with a crown saw used to bore a circular opening in the cranium. Once the saw established a track, the perforating pin in the middle of the saw could be removed. Since the 18th century, the brace could be fitted with a variety of trepanning tools. 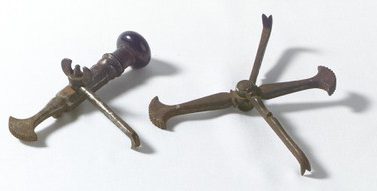 Dental instruments: one-sided and double-sided pelican for root extraction, first half of the 18th century

The collection of later medical instruments was started in the 1930s with donations of individual physicians. Later, hospitals and other health-care institutions contributed as well. The surgical instruments and instrument sets and diagnostic and therapeutic equipment come mostly from the 19th and the first half of the 20th century. The museum continues to map the recent history of medical technology as well: from donations and bequests, it has acquired a number of instruments that had just become historical. 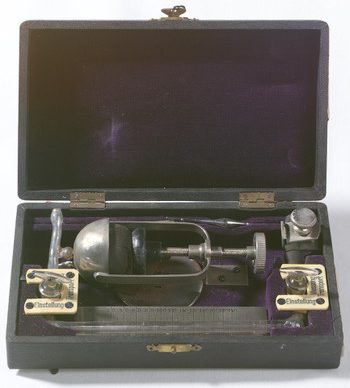 Gärtner’s tonometer for measuring blood pressure designed by an Austrian pathologist Gustav Gärtner (1855-1937) in 1899. The manometer measures the force needed to arrest pulsation in a finger constricted by a rubber ring. 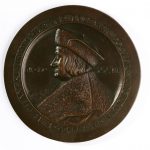 The numismatic collection contains about 700 medals, plaques and coins on medical, health-care and pharmaceutical themes. The greater part of the collection dates to the 18th and the 19th centuries.

The core of the collection was bequeathed to the museum by the important Czech numismatist, MUDr. Antonin Mastny. The collection grew in later years as well and it was catalogued by another physician and numismatist, Jaroslav Obermajer. An oval cast medal with a loop for the ribbon, with the portrait of the Virgin Mary of Karlov on the obverse. The inscription on the reverse reads: ”Midwife certified under the Medical Patent of July 27, 1753”

A decree regulating the education of midwives issued by the Empress Maria Theresia required certified midwives to wear the medal around their neck.

The Würtz collection consists of about 170 statuettes and figures made of porcelain, metal, wood and ivory. The collection, founded by Hans Würtz (1875-1958), a German defectologist and special educator, is complemented by art reproductions with the common motif of physically disabled or handicapped people. The Würtz collection, documenting the history of depiction of physical disability in European applied art, still awaits organization by an art historian. Figurines from the Würtz collection: a wood and cloth figure of a man disabled by scrofulosis Two figures of disabled persons with a dog, of wood and ivory. Probably Germany, 19th century.

Among other three-dimensional objects in the Medical Museum collections there are, for example, two models of pregnant women used in teaching medical students (17th – 18th century) or a collection of paintings, sculptures and prints. Ex libris of Czech physicians began to be collected soon after the foundation of the Museum as well.  The museum’s small pharmaceutical collection includes pharmacy jars of wood, porcelain and majolica, as well as medicine chests, both conventional and homeopathic. An ivory model of a pregnant woman used for teaching of medical students, around 1700 The Medical Museum houses the collection of old prints of the National Medical Library. The Old Print Collection contains some

The books are available for study by appointment. Digitized documents from the Museum collections can be found in the NML’s Digital Library.