Physicians’ House Club Room. Image by the Illek & Paul Press Photo Service, from the exhibition „For a New Architecture,“ held in the Museum of Applied Arts in Prague, May 30- September 29, 1940. NML Medical Museum Photographic Collection, FA 118.

Early history of the National Medical Library are bound with the Physicians’ House on the Sokolska Avenue, founded by Czech physicians and their professional organizations. The Central Library and Reading Room of Czechoslovak Physicians and Medical Students opened in that building in 1931, having merged a number of libraries belonging to associations and clubs of doctors and students of medicine. The Physicians’ House continued to house the Medical Library under all its subsequent appellations – the State Medical Library, the Institute of Medical Documentation, the State Institute for Medical Documentary and Library Services and, since 1992, the National Library of Medicine – throughout the postwar years. Until today, the library uses the second floor of the building as its journal reading room.

In April 1996, the Library found its new home in a former apartment house Nr. 1791, in Sokolska 54, directly opposite the Physicians’ House. The readers come here to borrow books, to collect results of literature searches, to search databases and to view the Medical Museum exhibits; most librarians and other employees of the Library were hired here and continue to pass under the house’s decorative portal every weekday morning. After more than 20 years, the Library and its building cannot be thought apart.

The history of the Physicians’ House has been told many times; photographs display phases of its construction and the events that physicians organized and experienced there. On the other hand, we have not been able to locate views of our building N. 54 that would predate the year 1996. There are or seem to be no photographs of the apartment house finished in 1897 and inhabited till the 1920s or the restaurant and pub it housed, of the State Land Office, the land reform department of the Ministry of Agriculture and the Land Office for Bohemia and Moravia reestablished after the German invasion, subsequently located here from the 1920s to the 1940s, nor of the Quarantine Reception Centre for displaced persons run here in 1945- 1946, nor of the General Spa Authority of the Health Ministry in the early 1950s, nor of the Institute for Health Education and National Center for Health Promotion in subsequent decades.

In the Medical Museum Photographic Collection, a single photograph documents the history of the National Medical Library building. The picture, dated 1940, portrays the functionalist interior of the clubroom in the Physicians’ House with furniture designed by František Vahala (1881- 1942). Behind the wide windows of the room, we glimpse the façade of the Sokolska 54 house with the banner of the Pilsen Restaurant. The restaurant with Pilsner on draft was opened by Gustav Stejskal (born 1860) in the year 1900: later it became known as “Fořtovna” (literally, a gamekeepers house) after the innkeeper in 1901-1911, Kateřina Fořt (born 1858).  Distinguished among the other 20 century innkeepers were František Nedvídek (1867-1929), who ran the restaurant from 1912 till his death, and Antonín Regner (born 1897), who took it over in 1936 and operated it through the years of Nazi occupation and, as „Prazdroj in Myslivna“ until the early 1950s. The banner of the restaurant, almost illegible, seems to carry Regner’s name in small print under the title “Pilsen Restaurant.”

The image, we may say, came to being by accident. A similar accident may have produced other photos of the house: among our readers or their ancestors, someone may have walked on the Sokolska Avenue and taken photographs, someone may know of a picture of the restaurant, the Reception Centre of 1945 or the whole street from the Graf hotel to the corner of the Rumunska street on the way to the highway. We will tell our readers more of the story of the house in the future: but if someone shares a picture with us, one image is worth a thousand words. 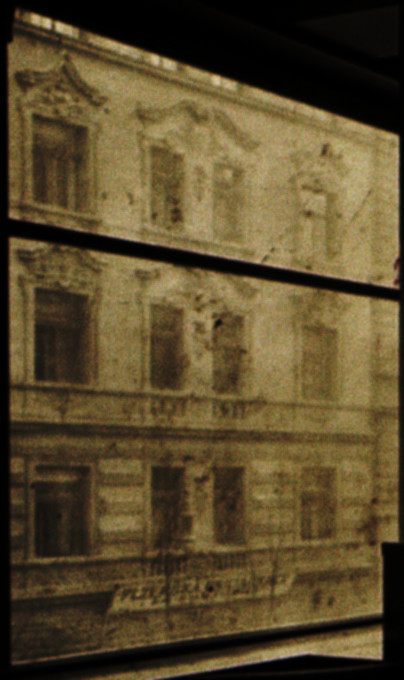