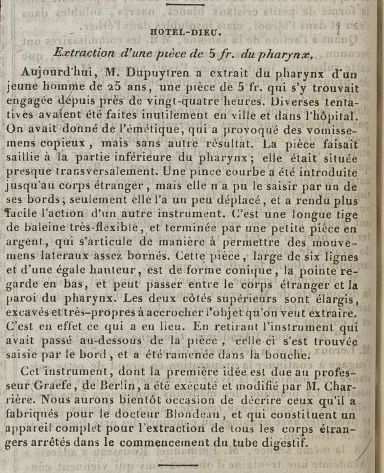 According to press releases, Guillaume Dupuytren operated in Hôtel-Dieu on May 14, 1830. An article in the Bulletin de thérapie (1850), cited in the review in Schmidts Jahrbücher der in- und ausländischen gesammten Medicin (1851, 214-216), signed Streubel, dates the operation and the coming of the instrument to France to the year 1828.

Hôtel-Dieu/ Extraction of a five-franc coin from the pharynx

Today, M. Dupuytren extracted a five-franc coin from the pharynx of a youth of 25 years, one lodged there for almost 24 hours. Many different previous attempts, in the city and the hospital, remained unsuccesful. Administration of emetics caused forceful vomiting, but with no result. The coin protruded in the lower part of the pharynx, placed almost transversally. A curved forceps reached the foreign object, but rather than grasping its edge, only moved it somewhat and facilitated the use of another instrument. The latter was a long, very flexible stick made of whalebone, with a silver plate at the end, placed on a hinge to allow limited movement to the sides. This plate, conical with the tip facing down, 6 lines long and the same height, can pass between the foreign body and the pharynx wall. Both upper faces are larger, hollow and well fitted to grasp the extracted object. That is indeed what has happened. The instrument passed below the coin, grasped it by an edge and extracted it back to the mouth.

The instrument had been originally designed by Professor Gräfe in Berlin; it was made and modified by M. Charriere. Soon we shall have occasion to describe instruments the latter has made for dr. Blondeau, a complete set for removing all foreign objects lodged at the start of the digestive tube.