October 28, 1918 in the Diary of Professor Vladimír Bergauer 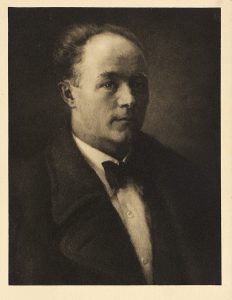 The birth of the Czechoslovak Republic in 1918 intersected with everyday lives of Czech people in many different ways. The Medical Museum collection preserve a student diary of Vladimír Bergauer (1898-1942) later Associate Professor of General Biology at the Czech Medical Faculty in Prague, Director of the Czechoslovak Institute for National Eugenics and a resistance fighter against the Nazi occupation, executed in Mauthausen. The diary covers the years 1914-1922. Student love relationships and breakups intertwine with events of small- town and world politics, theater with army training and the constant threat of military conscription and the war, dance, books and art with academic pursuits and first experience of scientific work. The diary in two notebooks was found in 1945 in the furniture confiscated from Bergauer in 1942 and stored by the Gestapo in a Prague department store to be sold cheaply to Nazi Party members.

Vladimír Bergauer graduated from the gymnasium in the South Bohemian town of Pisek on July 2, 1917 and in October enrolled in the Prague Medical Faculty. He continued to return to Pisek, to his family and friends, to theater, art and music: he was an able pianist, singer and photographer and regularly acted in plays performed by the Prachen cultural association. The account of the fall of 1918 begins with the September premiere of Ladislav Novak’s comedy The Duelists (Duelanti, 1913), in which Bergauer played a leading role. The Spanish flu epidemic interrupted teaching at the university in early October and some of Bergauer’s fellow students fell ill as well. Together with his father, the pharmacist Julius Bergauer (1860-1923) and three former classmates, Bergauer returned to Pisek. 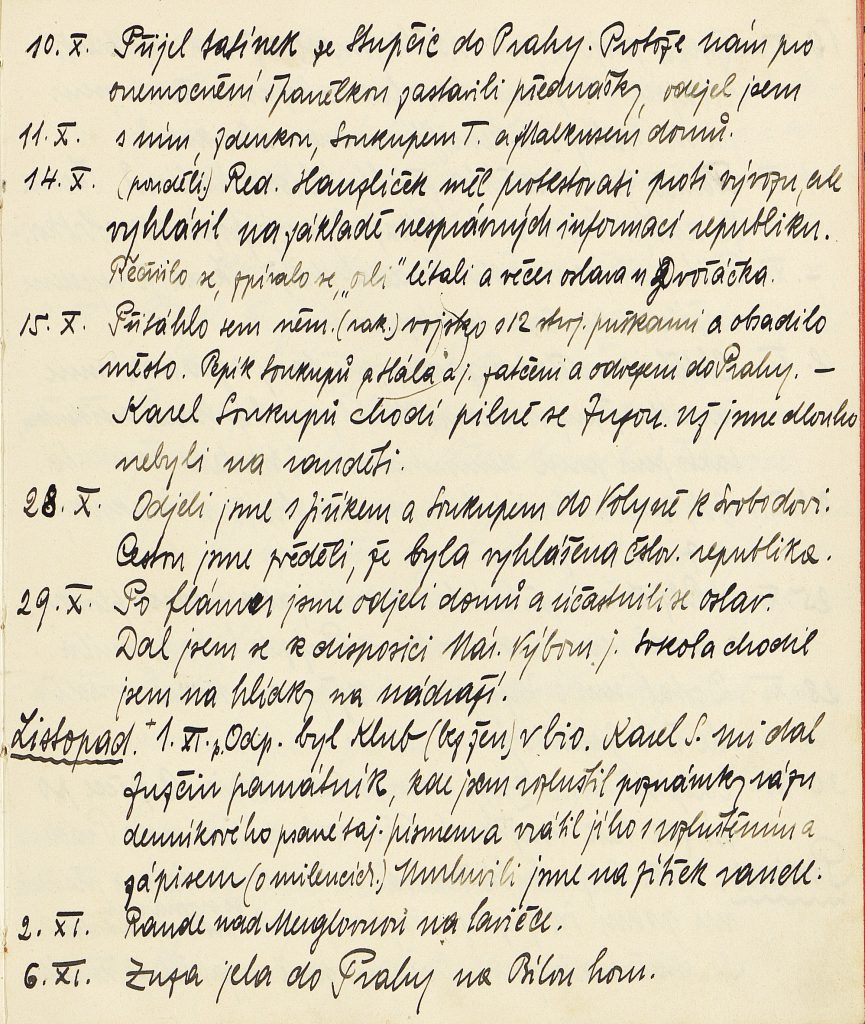 On October 14, the Central Socialist Council, which represented both socialist parties in the Czech Lands, organized a general strike to protest exports of food and coal from the country. Originally, the strike should have culminated in independence proclamation: this plan was then cancelled as too risky, but the socialist activist Frantisek Hanzlicek, sent to Pisek and believing that the Republic is being declared in Prague, heralded independence in a flaming address from the Town House balcony. Pisek citizens tore down symbols of the monarchy, flags, portraits of the emperor and a large eagle from the district office building; the National Committee was constituted, the veterinarian Josef Soukup (1897-)  planted three lime trees as symbols of the new Czech state in the city park and celebrations started in the hotel Dvoracek in the town center. The following day, 350 soldiers with machine guns came to Pisek from Chomutov, Hanzlicek, Soukup, the private Václav Hála (later an engineer,  1897-1900) and a few other soldiers and civilians were arrested and interned at the District Court in Pisek. They were released only after 28 October. Bergauer celebrated the birth of Czechoslovakia with his friend Tomáš Soukup (1897-, later a lawyer and Chair of the Prácheň association) and his brother Jiri (later also a pharmacist, 1903-) with a party at the home of a recently demobilized classmate and a future physician Alois Svoboda (1900-) in Volyně.

„Historical events“ inscribe themselves into everyday lives, but do not suspend them. In the next two weeks of political uncertainty, the diarist’s classmate „Karel Soukup diligently dates Suzie“, friends come together and lovers break up. In early November, Suzie – by then Bergauer’s girlfriend – leaves for a mass meeting in Prague, at the site of the 1620 White Mountain battle that had started Austrian rule over the Czech Lands. Crowds returning from just this meeting pulled down and destroyed the Marian Column at the Old Town Square in Prague in an act of iconoclastic fervor still well remembered today. And the fabric of history continues to weave the small and the large narratives together.

In September, we have commemorated Vladimir Bergauer’s 120 anniversary. We will return both to his diary and his life on these pages. Vladimír Bergauer with his wife Markéta née Kňourek (1904-1942), Director of the Budeč student housing in Prague, in 1938 (České slovo May 10, 1938, Medical Museum Archives). The couple engaged in anti-Nazi resistence: in 1942, they hid Ronald Littledale (1902-1944), a British prisoner-of-war escapee, in their apartment in Vinohrady. They were arrested on June 30, 1942, imprisoned in the Small Fortress in Theresienstadt and executed in Mauthausen on October 24, 1942. Vladimír Bergauer was named Extraordinary Professor of Biology in memoriam in 1948.