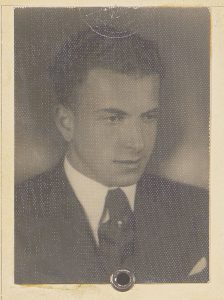 Certificate of passing the first rigorous medical exam, awarded to MUDr. Oskar Beer (April 18, 1914 Kunžvart – June 19, 1976 Praha) after Czech universities were closed by the Nazis in 1939. Dr. Beer could pass further medical exams only after the Liberation. He worked as warehouseman and on July 13, 1943 he was deported to Theresienstadt where, in 1945, he took part in fighting the typhoid epidemic.  He graduated in medicine on July 23, 1945 and specialized in obstetrics and gynaecology, working in the Tabor hospital in Southern Bohemia, in the department of gynaecology in Prague-Krč (1949-1955) and later as Chair of the Gynaecological Department of District Institute of National Health in Prague 4. NML Medical Museum, Document Collection