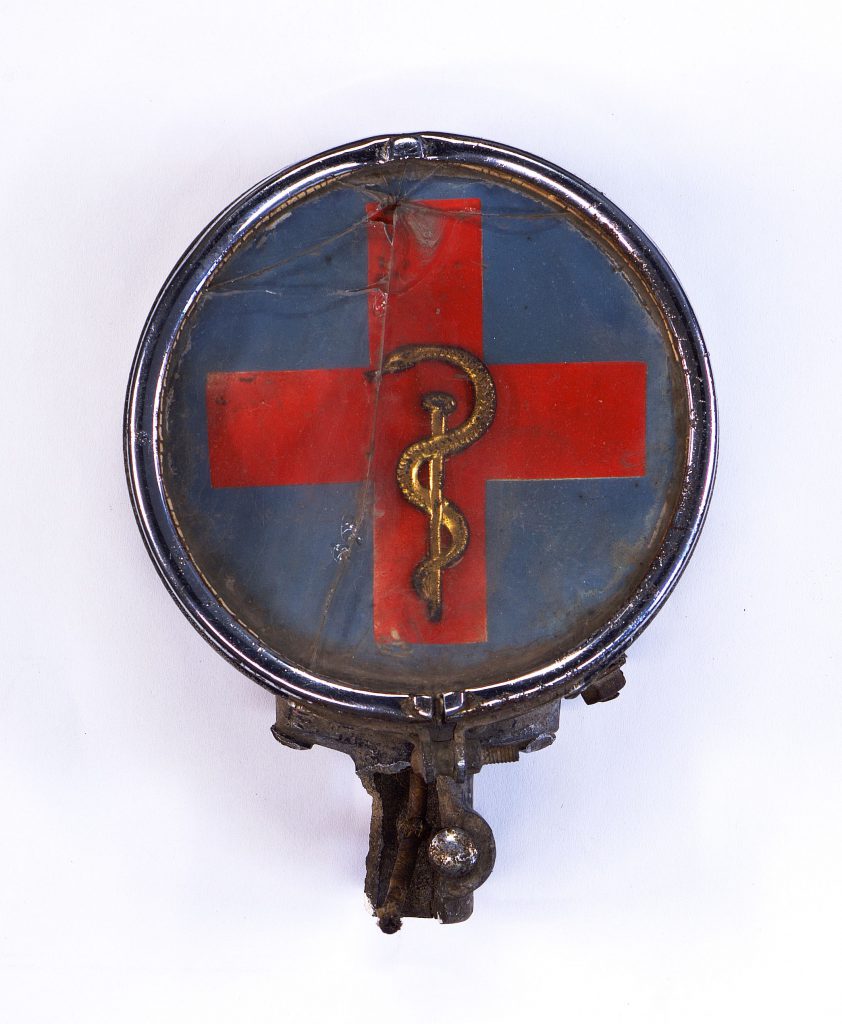 Illuminated car radiator badge marked the automobiles of medical doctors on duty. The Aesculap Autoclub of Czechoslovak physicians, car owners and operators (founded in 1930), introduced it in 1931. The club chose a red cross in a blue field to avoid confusion with the internationally and nationally protected Red Cross symbol. The signs were made by František Kašpar’s Avion Company in Olomouc, later Prague. The Autoclub sold them to doctors, members and even non-members, for Kč 165. Placed between the front lights of the car when on duty and covered at other times, the emblem allowed the driver to pass through and park in restricted streets in the center of Prague as well as other towns. This permission, similar to those of emergency vehicles, applied in Brno, Bratislava, Moravian Ostrava, Jihlava (Iglau), Marienbad, as well as Uzhorod, Mukacevo or Chust. According to the Prague Street and Traffic Ordinance of September 1, 1931, physician cars could park in the Narodni, Na Prikope, Celetna or 28 October Streets in the old city center. The German-language Verband deutscher kraftfahrender Ärzte in der Tschechoslowakischen Republik used a similar sign with a blue cross in a white field, acknowledged, e.g., by the cities of Teplice, Most (Brüx), Cheb (Eger) or Opava. Many cities such as Plzeň, Olomouc, Liberec (Reichenberg) or Ústí nad Labem (Aussig) honored both signs of the often sharply competing national clubs.

At the Congress of the Union of Medical Automobile Clubs (UIACM) in Utrecht in May 1934, the representatives of Aesculap Autoclub strove to establish the Czech version of the Czechoslovak sign internationally. The Czechoslovak Red Cross, they claimed, allowed the use of the Red Cross symbol on blue background. The International Committee of the Red Cross, however, rejected the proposal and the UIACM Chair suggested the caduceus (winged snake) symbol on a warning triangle instead. The official lighted sign of a physician’s car, valid in Czechoslovakia since 1936, included a red Aesculap staff on a blue triangle in a white field. The red and blue crosses remained club insignia of the respective associations.

The automobile sign in the museum collection comes from the estate of dr. Václav Šašek (1891-1944), a District Physician in Brandýsek in Central Bohemia since 1920. It was donated by the grandson of dr. Šašek in 2011. Thanks are due to Jan Tuček, the family of dr. Václav Šašek, Ondřej Šafařík and other colleagues from the Medical Museum and the National Medical Library.