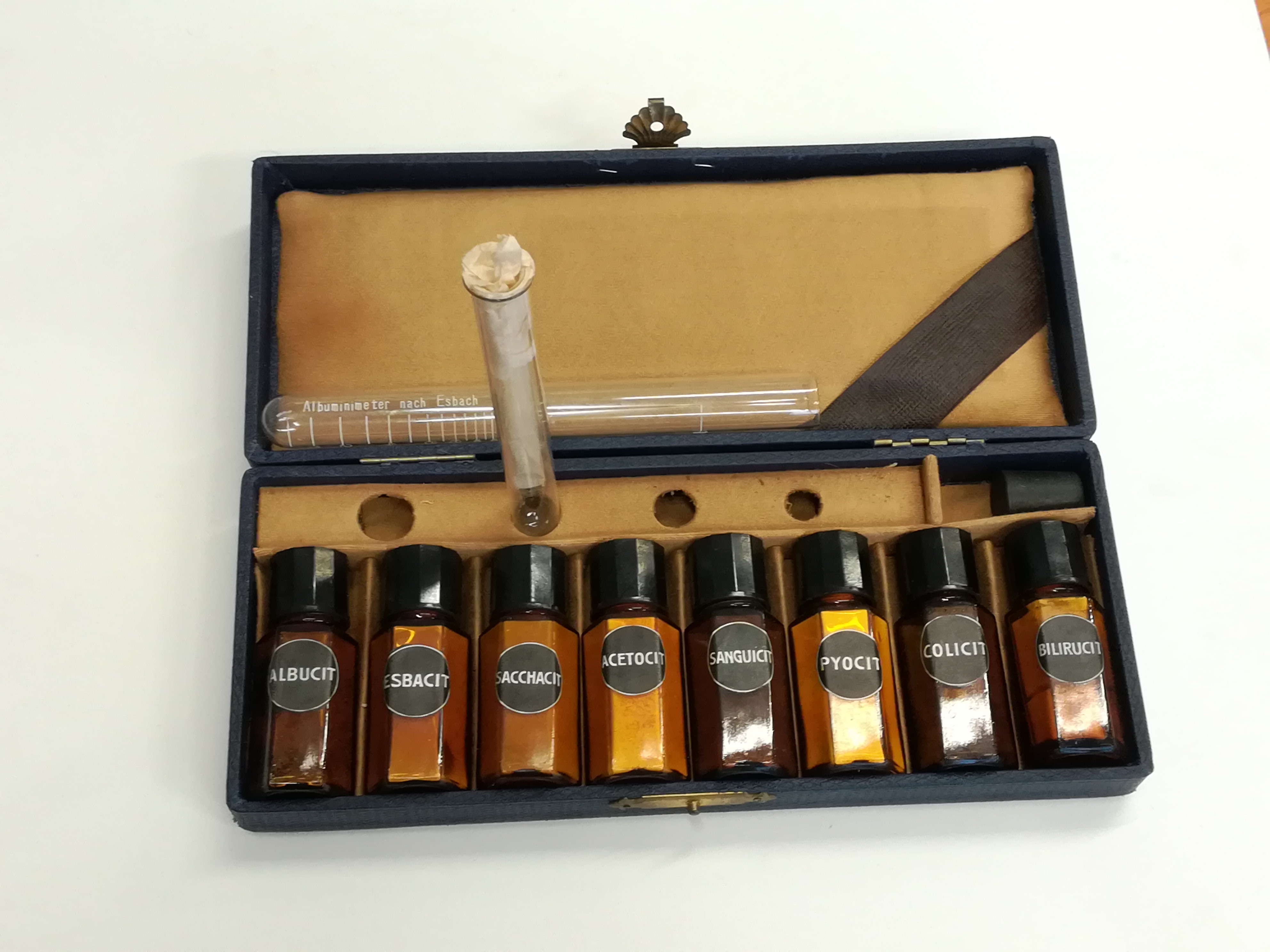 Urine testing, together with physical examination and palpation of the pulse, belongs to the oldest methods of medical examination. Uroscopy, diagnosis from observation of color, consistency and visible admixtures of urine, appears already in the 11 century BCE cuneiform “diagnostic textbook.” The method, familiar in antiquity, gained new currency in Byzantine medicine: in the 6th and 7th centuries, Magnus of Emesa (Homs) and Stephanos of Athens compiled first speaialised guides to uroscopy. The Byzantine tradition entered Western medicine particularly through the Peri ouron (On Urines) written by Magnus’s pupil Theophilos Protosparthios and the Kitab al-baul (Book on Urines) by Isaac Israeli (Isaac the Jew, 840-932) of Egypt and Tunisia. In the 10 and 11 centuries, both texts were translated into Latin and became central to the medical curriculum at the Salerno medical faculty, the first of its kind in mediaeval Europe. The matula – bottle for capturing and observing urine – was both the centerpiece of mediaeval medical equipment and a symbol of the profession. 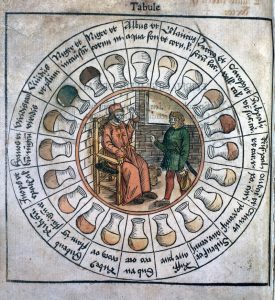 The „urine wheel“ for interpreting colors of urine, Epiphaniae medicorum by Udalric Binder, the court physician of Friedrich III, the Wise, Elector of Saxony, 1506 (Wellcome Library)

In 1491, a medical compendium (Fasciculus medicinae) including a tractate on uroscopy was published in Venice under the name of Johannes de Ketham. The text included a “urine wheel” for color analysis, which spread far beyond the circle of medical specialists. Since the 15th century, however, physicians began to turn away from purely visual urine examination and the method became synonymous with archaic, antiquated medical thought. Nicolas of Cusa (1401-1464) first proposed assessing specific weight of urine, comparing it with rainwater. His suggestion was heeded by Jean-Baptiste van Helmont (1577-1644), the first to subject urine to chemical analysis. Scientists of the following centuries continued to explore chemical properties of urine. In 1762, Hermann Boerhaave (1668-1738) isolated urea; in the early 19 century William Prout (1785-1850) examined acidity of urine with litmus paper and tested it for the presence of sugar, protein and bile; during 19 century further chemical tests were developed.

Color, consistency and impurities remained the criteria by which to assess the test results. In the year 1874, the French physician Georges Hubert Esbach (1843-1890) presented a method to determine the amount of protein in urine. To a calibrated test tube containing urine, albuminometer, he added an identical amount of reagent containing citrate and picric acids, closed the tube with a rubber plug, turned it several times to mix the ingredients and let stand for 24 hours. The volume of yellow picrate sediment corresponds to the protein level in urine.

In the 1930s, methods of urine testing became both simpler and more sensitive. The Bavarian, formerly military bacteriologist Hans Lipp (1876- 1944) worked on simplifying urine analysis throughout his career. Almost a half of his 1916 handbook of Sensitive, Simple and Quick Analytic Methods for Military Laboratories and General Practitioners (Empfindliche, einfache und rasch ausführbare Untersuchungsmethoden für Lazarett-Laboratorien und praktische Ärzte, published as Part IV of the Army Physician Pocket Guide, further editions 1917, 1939, 1941) was devoted to urine analysis. In the early 1930s, Lipp designed a set of reagents for quick assessment of various urine ingredients. In 1931 the set consisted of three reagents, during the 1930s the number of bottles rose to eight. Lipp’s test kit was devised to be comprehensive: in addition to the Esbach apparatus and another, unmarked test tube, it included reagents such as Acetocit, a ferrocyanide compound that turned the color of urine to violet in the presence of acetone. Sacchacit, a combination of metallic salts, changes color according to amount of sugar in the sample; Colicit, a modification of the Griess reagent, turns red when nitrites produced by Escherichia coli are present. The inspired brand name Urocit as well as the names of individual reagents (ending in “-cit”, the Latin for “fast”) were also intended to generate commercial success.

In Czechoslovakia, the set was distributed under the name Diurocit by the Panchema Company of the engineer Karl Salz (b. 1901) in the West Bohemian town of Stod. Under the same name (Diurocit- Sacchacitometre) the company offered also a simple titration apparatus for estimating the amount of sugar in urine. The set in the Medical Museum collection was used by Václav Šašek (1891-1944), a district physician in Brandýsek, and was donated to the museum by his family.