An exhibit in the NML Medical Museum presents the history of Czechoslovak pedicure from the show factory owner J. A. Baťa and the “Baťa pedicurist” and former medical student František Kocourek to the socialist era. The museum holds many tools, instruments and books on the history of the care for the feet. The exhibit shows 1930s corn planes manufactured and used in Czechoslovakia, scissors, razors and tinctures or the “Fix-Nix” paste for chemical removal of bunions and corns. 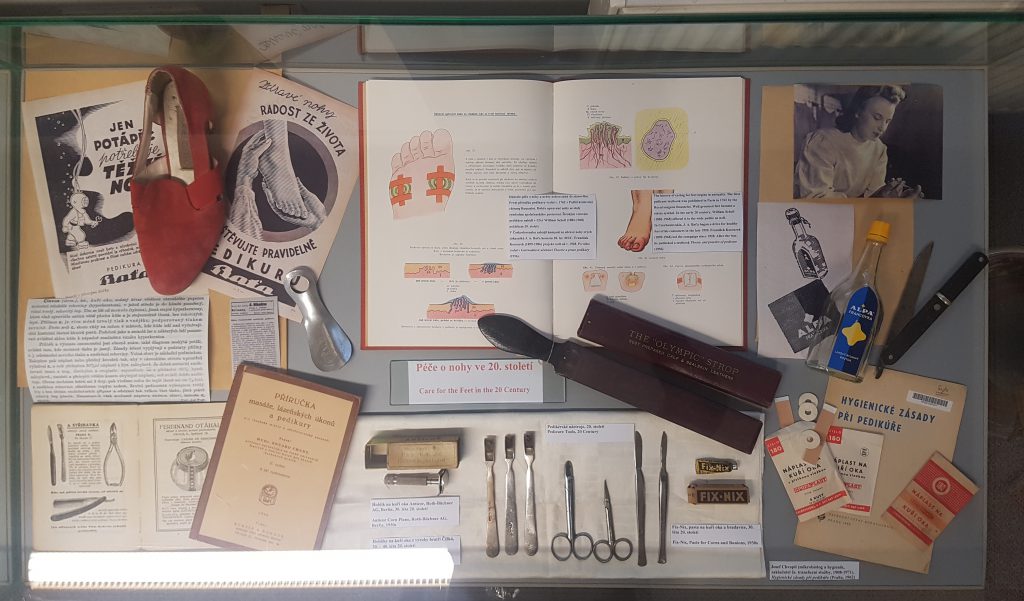 The history of caring for feet begins in antiquity. The first pedicure textbook was published in Paris in 1762 by the Royal surgeon Rousselot. Well groomed feet became a status symbol. In the early 20 century, William Scholl (1882-1968) offered it to the wide public as well.

In Czechoslovakia, J. A. Baťa began a drive for healthy feet of his customers in the late 1920. Theoretically, there should have been a trained pedicurist in every Baťa store to advise customers on foot health – and to have them buy the shoes right for them. František Kocourek (1899-1968) led the campaign since 1928. After the war, Kocourek published a textbook Theory and practice of pedicure (1956).

Among the physicians who wrote on the principles and practice of pedicure,  Edvard Cmunt, Professor of Balneology in Prague, published a textbook of massage, spa procedures and pedicure for spa workers and nurses (1940-1944); the founder of Czechoslovak blood  transfusion service, dr. Josef Chvapil (1908-1971), authored a guide to hygienic principles in pedicure in 1962.