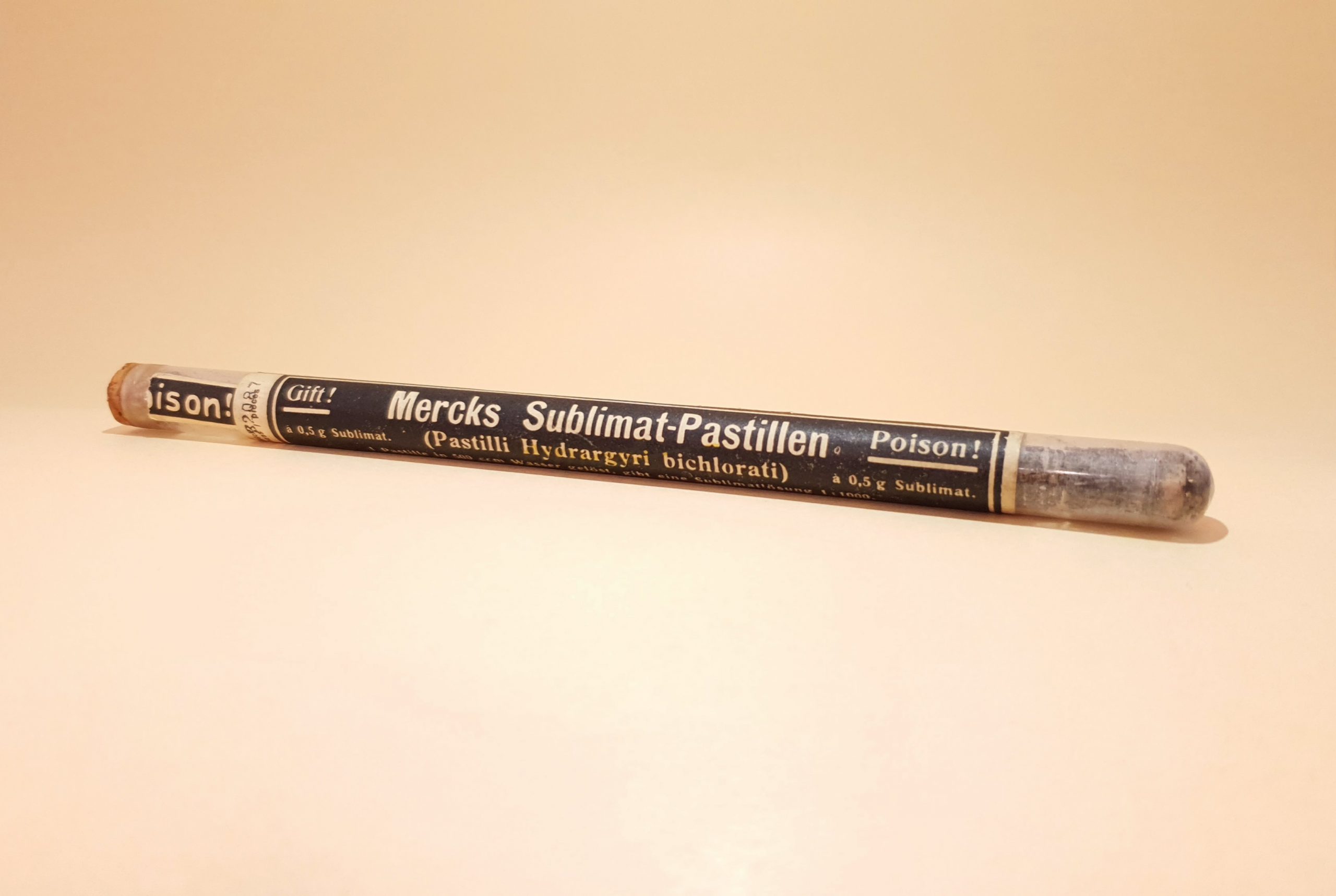 Object of the Month: November 2020

Corrosive Sublimate, A Disinfectant Against the Virus, 1918

News of the current pandemic, the changing conditions and the response come as quickly as they go.  Some events and pseudoevents remain in our memory even after their protagonists depart the scene. At a press briefing on April 24, 2020, Donald Trump suggested „cleaning“ lungs of COVID 19 patients by injecting them with a disinfectant. The proposal induced an allergic reaction on part of both health workers and detergent makers. Thankfully, the President has not instigated a mass following, even if the number of bleach poisonings did rise at the turn of April and May. Experts were no more taken with Trump’s suggestion to bring UV „light inside the body… either through the skin or in some other way” to destroy the virus. On the following day, the President explained that he was asking a sarcastic, and a very sarcastic question, to the reporters… just to see what would happen.” Whatever.

Donald Trump has not been alone in advocating bleach treatment of COVID 19. As far back as 2016, the “alternative cure” by the “miracle mineral solution” was announced in the US and spread abroad to Europe and elsewhere. The severely toxic chlorine dioxide solution, used for cleaning swimming pools, was claimed to treat and prevent multiple diseases. Authorities in the US and Europe, including the Czech Republic, issued warnings about the agent. Proponents of “MMS” continue, however, promoting the poisonous bleach on the internet and in the media, alleging it can treat coronavirus infections a well. Intentionally or not, Trump’s propositions provided support for their claims.

Donald Trump’s recommendation has historical precursors or parallels. In the 1880s, Emil von Behring (1854-1917), one of the founders of immunology, experimented with “inner disinfection”, injecting experimental animals with diphtheria and anthrax bacteria on the one hand and toxic chemicals such as silver nitrate and mercury and iodine compounds on the other. Disinfectants were supposed to slow or even stop the growth of bacteria. The research resulted in the discovery that rats and guinea pigs that survived it became immune to the disease, as antibodies formed in their blood serum. The “inner diseinfection” itself foundered on the problem of dosing: doses that would block the bacteria from multiplying were deadly for the animal. The same, in fact, would be the case if disinfectants were used for COVID 19. Pandemic influenza, the “Spanish flu” of the late 1910s, was sometimes treated with corrosive sublimate (mercuric chloride), a toxic substance used to disinfect hands, wounds, surgical instruments and fields. The idea appeared, however, in respectable medical journals; mercuric chloride had been used against syphilis and other skin and lung diseases for centuries; and early 20 century doctors had no effective cure (or vaccine) against influenza. The causative agent of the Spanish flu was neither visible, nor certain. (The role of filterable germs – viruses – in the disease remained controversial, their characteristics unclear.) Symptomatic treatment using quinine and its derivatives or cardiotonics and surgical therapy of lung complications may have saved the lives of many patients, but did not slow or stop the course of the pandemic. Using known and effective metal- based antiseptics internally was a simple choice. Physicians were willing – relying on the tradition or on scientific knowledge – to take the risk of overdosing or underdosing the patient.

Corrosive sublimate was used in treating skin problems and ulcers by Arabic physicians of the Middle Ages. Since the 16 century, it was a common medication for syphilis. Rubbing sublimate into the skin was part of the “salivation treatment”: patients sweated and salivated in closed quarters, until harmful substances departed their bodies. Mercury damaged mucous membranes, kidneys and liver; people suffered from gum and digestive tract bleeding, tremor, diarrhea and vomiting. In Goethe’s tragedy, Faust describes the production of this drug “more curst than hell” which killed more people than the disease. (The mortal dose of mercuric chloride is about 0, 5 g.) In place of such drastic procedures, Gerhard van Swieten (1700-1772) introduced ethanol solution of sublimate, administered orally, in 1754. Swieten’s correspondence with colleagues and his pupil’s publications propagated the “Liquor Swieteni” across the continent. In the 19 century, physicians preferred administering sublimate by subcutaneous injection, later also intravenously, in suppositories or pills. Besides syphilis, the substance was used in treating chronic laryngeal and lung infections, puerperal sepsis or septic wound infections. After 1910, new chemical medications (Salvarsan) took the place of mercury in treating syphilis by new chemical medications (Salvarsan), but arsenic injections were usually combined with mercury (sublimate) for better effect. Only the advent of antibiotics, in the 1940s, provided effective and safe treatment of the many diseases formerly treated by mercuric chloride.

In the early 20 century, sublimate was the “king of disinfectants” above all. Ernst von Bergmann (1836-1907) begun washing instruments and hands in the solution instead of spraying the surgical theatre with carbolic acid; also bandages and surgical cloths to cover the patient were infused with sublimate. In 1883, the pharmacist Karel Lábler (1852-1902) wrote: “Sublimate proved itself superbly in all experiments and among disinfectants it takes the first place. […] Clearly, it is a disinfectant in the true sense of the word and its disinfecting power shall surely be exploited to the utmost in the shortest time. Regarding the fact that, as a severe poison, sublimate still counts many enemies: this will relent over time, as, as stated above, one can work using very small doses and besides, remaining amounts of sublimate are easily washed away with water.“ The solution was a common disinfectant of the 1930s and 1940s; it was used also to irrigate wounds, infected urinary and genital tracts (including cases of gonorrhea) and eyes. Irritations and poisonings occurred regularly: sublimate intoxications resulting in death in lege artis use in surgery and gynecology are recorded until late 1940s. Even more often, it was by suicides and in abortions; burning oneself with sublimate on the skin or the ears could save a soldier from army or war service. The skinny malingerer in Hašek’s Good Soldier Schwejk included sublimate among the various poisons he purchased over time, consuming enough that “no one can tell my disease anymore.”

Philipp Leitner, the doctor of the Austro-Hungarian Reserve Hospital No. 5 on the Italian front and formerly assistant at the Medical Faculty in Klausenburg (Cluj) introduced sublimate as influenza treatment in 1918. According to Leitner, influenza was caused by a streptococcus: when neither streptococcal serum, nor colloid silver (collargol) helped his patients, he repeatedly injected a 1-2 ‰ solution of 2-3 mg into the elbow artery. The news of his success appeared in both professional and daily press: according to some papers, the discovery promised full victory over the pandemic. The Czech medical journal, Časopis lékařů českých, took up the story as published in the Wiener klinische Wochenschrift, reporting that „the author’s results were favorable indeed. Already the first injection brought about a marked improvement, which became more pronounced with further injections. To summarize the accomplishment of sublimate therapy: the fever fell, the cardiac activity improved. The process of lung infiltration was stopped, pneumonia no longer migrated from one lobe to another and healed faster. Especially purulent complications decreased. Appetite returned and the patient’s condition generally improved.“ In case of heart problems, Leitner added caffeine and camphor injection and infusions of digitalis. The method met with approval: the Chair of the Bacteriology Institute in Budapest, Bernard Vass (?-1930), did dispute the identification of the germ, but endorsed the use of sublimate, a substance that in his view was suitable in treating any and all septic infections. During the Spanish flu pandemic, others employed sublimate as well. In the US, Victor G. Vecki used it to treat patients with influenza pneumonia and other septic infections. Syphilitic patients treated with sublimate, it was found, did not fall ill with the flu, inspiring flu therapy in several hospitals. Dr. Ernst Bennek (1886-?), working in the Silesian town of Hohenelbe, or Kurt Käding (1892-1961) from the Barmbek Hospital in Hamburg, reported their successes with sublimate therapy. In Sweden, Erik Tretow (1875-1948) applied gray mercury ointment into the nasal cavity to prevent influenza. According to Käding, the risks of mercury poisoning were low when therapeutic doses of sublimate were used. Consensus, however, arose neither on the effect of sublimate, nor on its safety. In an article on treating sepsis, Rudolf Roosen (1889-?) noted that all „attempts to use disinfectants such as sublimate or carbolic acid for inner disinfection, i.e., killing bacteria inside a living organism, soon show that the body cells are harmed more than the bacteria. Using them in septic infections seems doomed to failure. This conclusion, though convincing, is not necessarily right.“ Instead of injecting the disinfectant directly, Roosen suggested injecting two compounds, one of which shows special affinity to the bacteria. He injected septic patients with calomel (mercurous chloride, less soluble and less toxic than sublimate): when reaching the bacteria, the two substances react and produce sublimate. The procedure – reminiscent of contemporary cancer therapy with monoclonal antibodies delivering toxins – could, however, hardly be used against the uncertain infectious agent of the flu.

In the Czech lands, the pathological anatomist Antonín Spilka (1876-1948) recommended sublimate treatment of influenza at the meeting of Czech Physician Association on December 2, 1918. The success of antiparasitic therapy proves, he claimed, that the disease is caused by a virus, rather than toxins produced by bacteria. Antiparasitic therapy, he claimed, was „best demonstrated by sublimate therapy; intravenous injection of sublimate eliminates all symptoms at a stroke; how would that be possible if sublimate, in destroying the parasite, did not destroy the immediate cause of the disease?“ Spilka lists no sources for his assertions: he may be referring to Leitner’s findings as they appeared in the press or domestic studies we do not know today. Whether and to what extent was the method practiced in Czech or Moravian hospitals is likewise unclear.

The US President was by no means the only politician to recommend COVID treatments that stroke his fancy, disregarding their real powers and risks. A look into the history of chemical treatment of infections shows all that has been tried and tested by medical science on the way to the knowledge that we possess today. Even in 2020, we have no „miracle cure“ for the viral infection we face. But we can do better than Lysol.