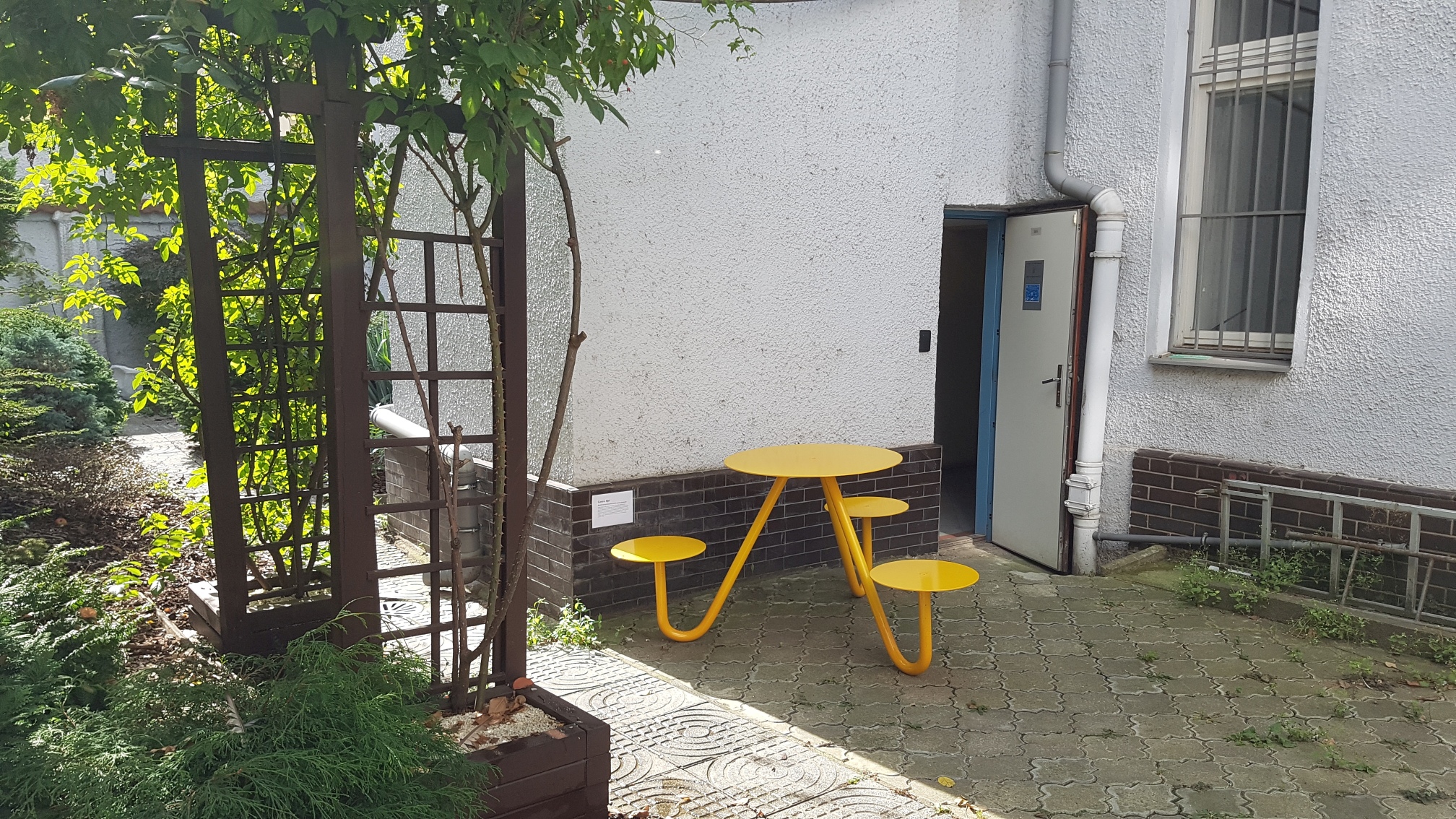 The bright yellow table „Gastro žije“ (Gastro Lives) at the entrance to the Medical Museum is a part of the museum exhibit and its COVID 19 collection difficult to miss. The concept of the Gastro Lives Safe Zone was conceived by the architect Václav Kocián, ing. Petr Kadlec and their colleagues from the Hua Hua Architects in Brno, noted for its project “Roušky malým hrdinům” (Masks for Little Heroes) from the beginning of this year’s pandemic. The studio sent 3D printer data for making tiny masks for Lego figures to anyone who wanted children to overcome the fear of face masks: the fear of wearing one and the fear of parents with their faces suddenly covered. To all of us without easy access to a 3D printer, Hua Hua Architects readily mailed the masks themselves. Figures of doctors with the smallest masks in the country thus stand in the Medical Museum COVID exhibition too.

In no time, the studio responded to the advance of the pandemic and the development of crisis regulations as well. The Gastro Safe Zone arose as an answer to the Czech Government regulation from March 14, 2020, which closed all restaurants to guests. The regulation may be the first of its kind in the modern Czech history, suggesting the extent of the danger. (During the Spanish Flu pandemic of 1918 – 1919, restaurants were closed only where infection did occur: even as schools, theaters or cinemas were shut down – against public protests – at many locations.) Effective March 24, the Government also forbade gathering of more than two people, except household members, in public places, and mandated two meter physical distancing. The regulation limited or annulled the social function of pubs and restaurants as places for meeting and conversation. A food in a container picked up at a takeaway window may fill the hungry stomach, but not the need to see new faces, speak to people one does not see every day and leave the bubbles of home and workplace for a while. Takeaway customers can meet a little further off, but close to one another at a bench they stand or sit exposed to the infection. Restaurants lose all the guests who seek human company more than food. 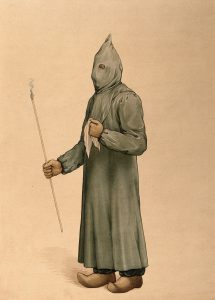 The yellow steel table for „safe zones“ is designed to break the seclusion of people with lunch boxes, while preventing an uncontrollable spread of the infection. The concept is rooted in the April Czech situation, but it can be adapted to places and times in which different rules of social distancing apply. The Czech Republic, Britain or Canada chose the maximum, two meter distance; China, France, Singapore or Austria followed the original WHO recommendation of one meter; Germany, Greece, Italy or Spain compromised on 1, 5 meters, while the American Centers for Disease Control preferred the well-established span of six feet or 1, 8 meters. The round table with metal desk and three seats is firmly anchored to the ground, while the size of the circle or square of masking tape that defines the safe zone can be easily adjusted to current regulations. The desk and the seats are easy to clean with an alcohol disinfectant.

Family members or two friends can buy food to go at a restaurant and sit inside the circle, with or without masks. Other tables of the same size stand some distance apart. People at different tables see and can speak to each other, without putting themselves in danger or breaking the law. The tables do not replace outside seating of bars and cafés: whether they are financed from public budgets or paid for by the restaurants or their customers, they should be open to everyone, becoming a safe and comfortable public space.

The prototype of the Gastro žije table was set up by the authors at the Capuchin Square in central Brno on April 7, with the backing of the City of Brno and the neighboring Café Pilát. The news of the „corona tables“ appeared in domestic as well as foreign media. During the month of April, having gained support from the Association of Hotels and Restaurants, the authors strove to obtain an exemption from the hygienic rules that would allow restaurant guests to sit at the table without face masks. At the same time, they sought sites where further „safe zones“could be placed, on other squares in Brno as well as in other cities. In early May, expansion of the project into other Brno neighborhoods was discussed with local authorities. The authors requested support from the Ministry of Health and the government as well, but in spite of some positive reactions, no statewide public support came back. As the safety and prevention measures against coronavirus were loosened again, outside seating with one and half meter distance between tables was permitted in restaurants from May 11 and inside seating from May 25. As the end of the pandemic appeared on the horizon, general enthusiasm had suddenly no place for „safe zones. “

To many, the yellow three-seat model, even supplemented with a half-sized table for narrow old city streets, appeared constricted and welded to the corona rules. This interest in more variable outside furniture inspired an expanded project named „Stoolky“, which included both metal and square tables in a number of colors with four or six seats. The design aimed at outside seating as well as natural environments, playgrounds and other public spaces beyond the context of the pandemic. During May, the Coca Cola Company embraced the concept, providing somewhat larger, four-seat tables for one restaurant in Prague and one in Bratislava. Enthusiasts have striven to add Stoolky to street furniture in other Czech cities. How will the second wave of the pandemic and the repeated closure of Czech restaurants beginning October 22 affect the project of colorful tables in the middle of safe zones?

The pilot Gastro žije table in the Medical Museum courtyard evokes a moment in the story of imagination that responded to the coronavirus with a vengeance, in Moravia, Bohemia and beyond. At the end of September and early in October, a few visitors could sit in the safe zone and perhaps draw some hope and strength for the coming „second wave. “ We believe that come spring it will greet old and new guests to the museum, with only the reminiscence of the bad times and without the need to keep distance from one another. We might even add a parasol. 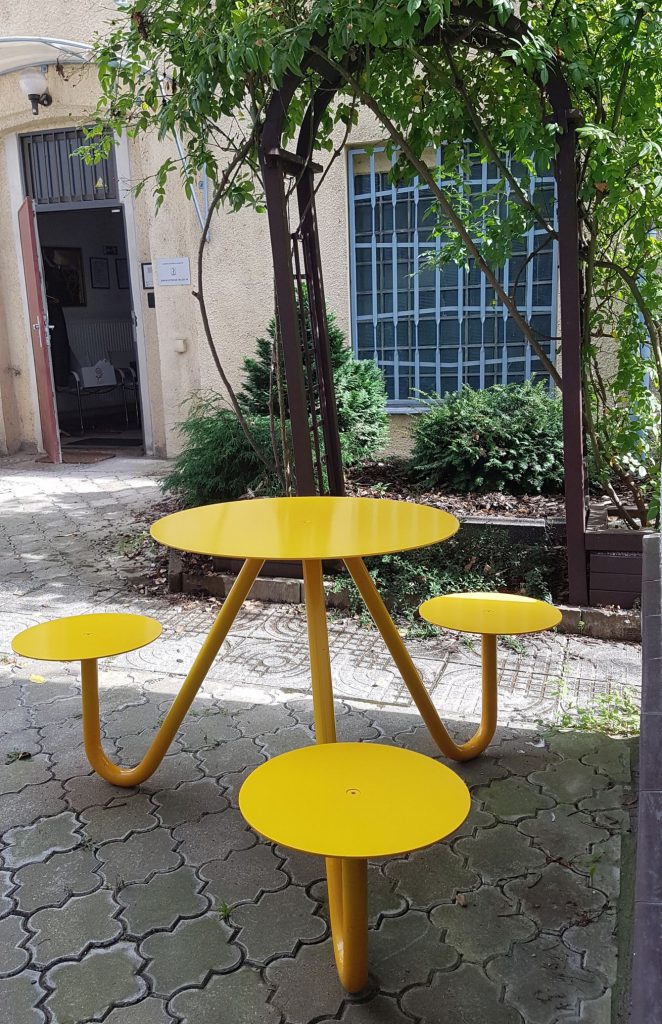