The Oldest Vaccination Attest in the Medical Museum Collection

A vaccination certificate is inscribed with two names, that of a doctor or a surgeon on the one hand and that of the vaccinated child – or adult – on the other. The document has been marked by 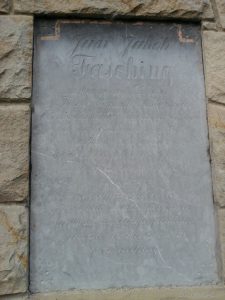 two human destinies that might be easily forgotten otherwise, and it gives us the chance to remember them. The oldest certificate in the Medical Museum collection was issued by Johann Jacob Fasching (1776-1836), a military surgeon, in the Polish city of Cracow, then under Austrian rule. The six-month-old boy receiving the vaccine, František Gebell (1807-1876), was to become a surgeon himself and a manor doctor at the central Bohemian Kacov estate. Jacob Fasching, born in Mladá Boleslav, studied in Vienna with army funding and graduated in June 1804, having already served as a junior doctor ( Unterarzt) in the 2nd Artillery Regiment in Vienna. After the Austerlitz defeat, he remained in the Austrian army as a senior doctor (Oberarzt) in the 55th Infantry Regiment Prince Reuss-Greitz based in Lublin. Like many military doctors, he went on to enter state service as a district physician in Cracow, Skala by Cracow, Zywiec and Andrychów. In 1815 he was appointed regional physician in Czernowicz and the next year he moved to Nowy Sacz (Neusandez), where he spent the rest of his life. He married Klara (1784- after 1840), the daughter of the painter and Cracow university professor Dominik Österreicher and a sister of the Cracow Rector Alojzy Rafał Estreicher, an accomplished botanist and entomologist. Fasching received much credit for the success of vaccination in Galicia: in 1831 he was awarded a 200 florin government prize (Impfpreis).

Bernard Gebell, the father of little František, was a medical professional as well. He became a surgeon, just as his son later on. In the first half of the 19 century, trained and qualified surgeons provided most available medical care, including vaccination. Medical study was long and expensive and the training of a surgeon was more than sufficient for practising medicine, especially in the countryside. Throughout the century, the content of medical and surgical education increasingly converged. Merely the positions of district and regional physicians remained restricted to doctors of medicine. Bernard Gebell (or Göbel) was born on June 18, 1777, probably in today’s Belgium: in 1803 he was listed as a junior doctor in the 55th Wallonian Infantry Regiment Murray de Melgum, stationed in Mons in the Austrian Netherlands. His wife Hyacintha née Bonschau (or Boujan, Bouschan), the mother of František, was born in Bruxelles. The regiment relocated to Lublin and later Cracow after Austria lost its Dutch territories in 1797 and dissolved after the defeats in Galicia and at Wagram in 1809. As opposed to Jakob Fasching, Bernard Gebel remained in the military. He served for four month as senior doctor in the 31 Military Hospital in Skalitz (Haupt-Feld-Spital Nr. 31 zu Skalitz) in Moravia and took part in the 1814 Allied campaign against Napoleon. His younger son Stephan, the younger brother of František, died in March 1814 en route to France in Waldshut in Baden. For a few months in 1815, Bernard directed the Main Field Hospital in Jaroslau, attached to the 24th Galician Infantry Regiment Baron Strauch. He was subsequently transferred to the „glorious team,“ the 36th Bohemian Infantry Regiment Baron Palombini, and retired after twenty years of service in 1832, with the rank of senior doctor and the yearly allowance of 100 florins. He spent the rest of his life with his son at the Kácov castle and died there „of old age“ on March 9, 1848. A True Pock 8 Days After Vaccination

What do we know of the encounter of Jacob Fasching, František Gebell and his parents in 1807? The text of vaccination certificates was spelled out by the Court Chancery Decree of January 28, 1808, but the wording was clearly used before. The attest is in German: only after 1848 the forms used both Czech and German, printed on each side of the sheet, and the vaccinator chose the language to use. Dr. Fasching certified that he had vaccinated František with cow lymph on July 20, 1807 and the boy sustained „three pustules of true pocks“ (drey Blattern als ächte Kuhpocken). He filled the form three weeks later, on August 13. At least two fully developed pustules proved the success of the vaccination: if they did not appear, the process had to be repeated. The doctor had to distinguish true and false pocks: the former healed with a scar, the latter, small and temporary blisters similar to acne, indicated that the body did not produce enough antigens and could result from skin reaction to the cut or another skin disease. The true pock, a lentil-shaped pustule with flat tip and a groove in the place of the cut, surrounded with a red circular swelling, became most prominent 8- 9 days after the vaccination. The whole shoulder swells and heats up; the child has fever and sensitive underarms and suffers from vomiting and diarrhea. Before two weeks, the pustule breaks, develops a scab and produces a permanent scar; the symptoms quickly disappear.

František was born in the Holy Spirit Convent on February 3, 1807 and was vaccinated in the „hospital building“ (Spitalsgebäude) in Cracow. The hospital was attached to the convent: it was founded in the 1200s and belonged, originally, to the order of Hospitallers of the Holy Spirit Order. The Order was abolished in 1783 and care for infants and mothers was assumed by the St. Lazarus General Hospital. The Holy Spirit hospital, thenceforth administered by the Diocese of Cracow, became an indigent women‘s shelter. After the Austrian conquest of Cracow in 1796, the parish was abolished and the convent dissolved. The hospital stayed in place in 1807, but part of the premises had been leased to a cloth factory and its medical expenses fell each year. The City of Cracow took over the building and exchanged it for a two floor house on the Wislna Street, which served poor women for seven more years, until poor welfare in Krakow was centralized and most of the buildings sold. The hospital itself was acquired first by the army and, in 1827, by the City as the site of a clinic for venereal and mental diseases. After the 1879 completion of the St. Lazarus Hospital, the building was used as municipal and private storage and was torn down in 1892, leaving a square named after the Holy Spirit to this day, the site of the Juliusz Slowacki municipal theater. Bernard Gebell left Cracow soon after his son was born. We do not know how long could the child stay with his parents. In 1820, the twelve- year-old František was a second grade pupil of the 21 Infantry Regiment boarding school in Josephstadt, led by the second lieutenant Joseph Schopf. Bernard may have served with this regiment for a while: the 24th Regiment had its Knaben- Erziehungs-Institut in Wels, the 36 Regiment in Kosmonosy. Many military units had boarding schools, called „Learning Institutes“ or „Homes,“ each for 48 sons of noncommissioned officers, primarily boys without parents or means who chose to serve in the army. This suggests that Hyacintha Gebell was no longer alive at this time. The homes were badly funded and the living conditions corresponded to their purpose, to accustom the students to the army mess and the army barracks, to doing their own cleaning and laundry. The boys took classes in the local school: if there was no higher, Latin school in the garrison town, they stayed in the third grade or apprenticed with the skilled workmen of the regiment. One admission condition was vaccination: in fact, this may have been among Bernard Gebell’s reasons for vaccinating his son. František’s name was repeatedly entered into the golden book of honor of the Institute, rewarding his moral behavior, diligence, and desirable progress in learning. However, health prevented him from launching a military career: we learn from subsequent documents that he suffered from a permanent eye defect. His handicap, congenital or not, continued to worsen, but he persisted in his studies nonetheless. 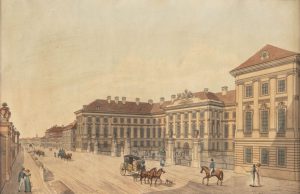 The archival file of František Gebell contain no data on his further education. Only in the fall of 1828 we encounter him in Vienna as a student of philosophy, preparatory classes for university study that followed a six year gymnasium. František applied to study surgery at the Josephine Academy, clearly intending to follow in his father’s footsteps and become a military doctor. The Academy was founded by Joseph II in 1784 to provide the army with medical personnel trained both in internal medicine and surgery. At first, the graduates left with a doctoral degree in surgery after two years of study. This policy provoked anger of the University, whose students took five years to graduate, and in 1820, the Emperor Franz I. discontinued the program. The Academy opened its doors anew in 1824, offering a lower, two year course and a higher course taking five years to complete. Only doctoral candidates had to pass their philosophy exams: the applicants for lower degree in surgery had to prove they had completed training with a master surgeon. Those untrained (ungelernte) provided proof of three year trivial school education and had to repeat the second year of surgical study. František’s philosophical study suggests he aimed for the higher degree, however difficult and above all costly that would have been.

The Academy rejected František Gebell’s application. The reason was, again, his eye condition: the Office of the Army Medical Commander, the Director of the Academy, issued him a certificate acknowledging that he “could not be admitted to the Imperial-Royal Medico-Surgical Academy merely because of a permanent defect of the eye.“ The document was signed by Burkhard Eblé (1799-1839), the Office secretary and himself an ophthalmologist. An Academy graduate had to, in return for the costs of training and the degree, commit to eight years of army service. If a disease prevented him from serving, the army had no reason to provide him with an education.

On the next day, November 11, 1828, František Gebell enrolled in the civilian school of surgery at the University of Vienna. He started a journey that was to lead him to Kacov, the place where he himself treated and vaccinated children of several generations. But that is a story for another time. 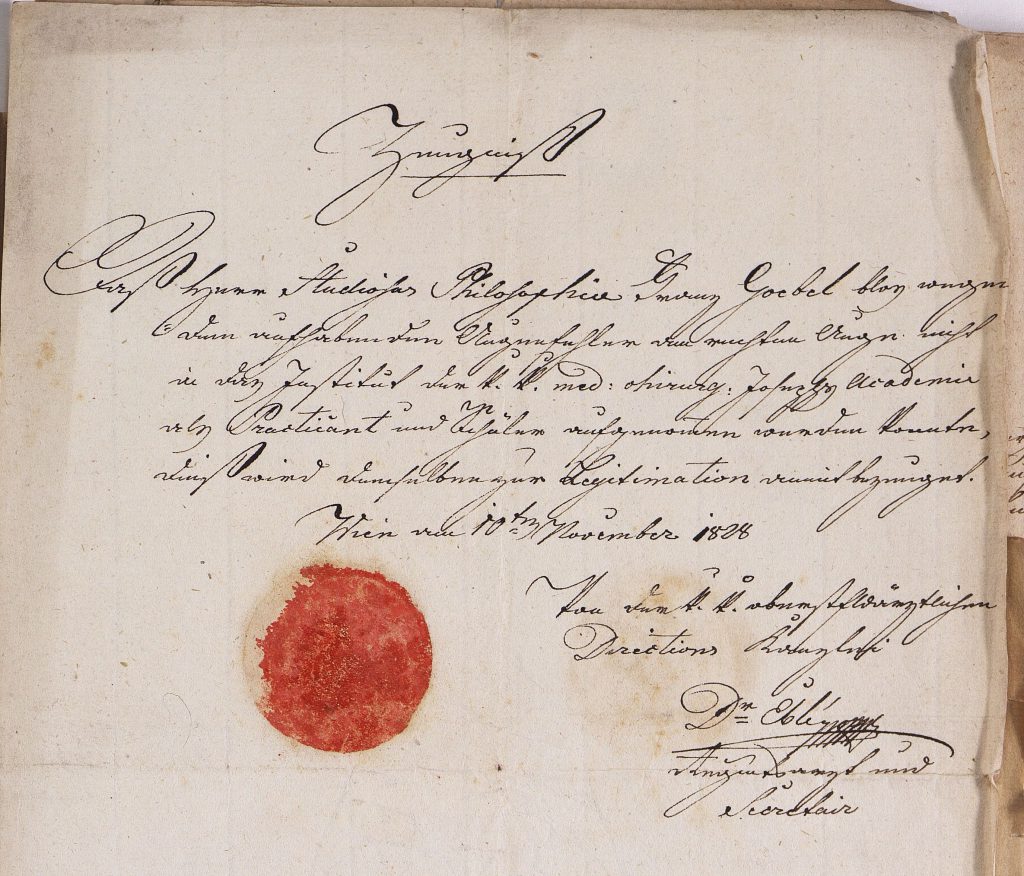