Knife for cutting clothes and boots of the injured

First aid to a person with an open bone fracture, a bleeding wound or heat or chemical burns must be given quickly, causing as little pain and hurt as possible. Clothes covering the wound are best cut with a knife or scissors. A burn victim is not undressed at all: the fabric is cut or ripped around the wound. Clothes on a frostbitten person, when he or she is placed in a warm room, are also best ripped, to avoid breaking rigid, fragile limbs.

Such advice is found already in early first aid guides from the 19 century. The rise of first „rescue societies,“ the earliest first aid associations, in the late 18 century, was prompted by the general fear of apparent death and premature burial familiar from Edgar Allan Poe mid-19 century stories. The societies propagated resuscitation methods, such as artificial respiration and body warming, and ran charnel houses where bodies of people with no signs of life were kept during the wake and the time necessary to ascertain death. At high risk places, the rescue societies provided emergency equipment.

Authorities in the Grand Duchy of Baden introduced emergency boxes (Nothkisten) for rescuing the apparently dead in 1828. District officials and doctors as well as ministers were required regularly to check the existing equipment and replenish it as needed. The boxes contained brushes and flannel towels, bandages, plasters and lint, as well as medicines, above all stimulants, or bloodletting tools. The Baden directive includes – perhaps for the first time – also a “curved knife for cutting clothes.” During the next century, the knife became an essential part of the equipment of rescue workers as well as military surgeons: high boots worn by both soldiers and hikers often had to be cut to access the wound.

In his 1872 Gun Wound Surgery, the Prussian general physician Bernhard von Beck (1821-1894) insisted that it was “most beneficial if the wound carrier is equipped with a small lantern and a strong knife, worn on a belt, for cutting boots and clothes.” The Chief of Saxon Army health services Wilhelm Roth (1833-1892) concurs that every medic carry a first aid kit, a lamp, a haversack and a clothing knife: then, he can assist the wounded even when a stretcher or a carriage are not available. Over the time, knives gave way to heavy scissors. The surgeon and founder of the German Samaritan union Friedrich von Esmarch (1823-1908) summarized his war experience: “clothes and boots often have to be cut asunder, either with a short, sharp knife or heavy duty scissors.” In his handbook for civilian health workers published in 1888, Esmarch prefers the “wound carrier scissors”, reserving the use of a knife for cutting clothes from burn victims. In 1913, Albert Bodart included scissors for clothes and knife for boots in the emergency equipment of the Alpine tourist club of Austria.

The ingenious sickle-shaped knife for clothes and boots in the NML Medical Museum collection is curved, with a dull, rounded tip and a blade on the inferior side of the arch, to avoid further injury when cutting through the fabric. An illustration of the instrument – in two versions, slightly bent and crescent-shaped – is found in the Aesculap surgical instrument catalogue, published around 1930. 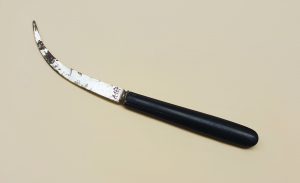 Knife according to Heister, steel and ebony, around 1800. NML Medical Museum, Acological Cabinet, A 167

The basic principle of the tool is much older. Curved knives with rounded tips protecting soft tissue (syringotomes) for cutting anal fistulas have been known since antiquity. In the 1730s, Lorenz Heister devised a one-edged knife with a thick, round tip for widening the wound in order to return the intestine into the abdominal cavity; he recommended a small version also for eyelid surgery. A similar knife was introduced by Gennaro Galbiati (1776-1834) for symphysiotomy, surgical division of the pubic symphysis cartilage in obstructed labor. In the 1936 Chiron catalogue, only the straighter model of the knife for clothing and boots appears.

Postwar surgical catalogues do not include the instrument at all: heavy bandage scissors are recommended for cutting clothes as well. The sickle-shaped knife did, however, find a later use. Since the 1960s, automobile safety belts spread across Europe: in Czechoslovakia, they became obligatory in 1967 on the front seats, in 1976 in the back. Buckling up saved innumerable lives, but in case of an accident, they could complicate rescue. First belt cutters were included in drivers’ equipment around 1980. In 1984, the belt cutter was featured at the Nuremberg IENA fair. The blade hidden in the plastic handle is a descendant both of 18 century surgical safety knives and of rescue workers’ instruments from the early 1900s. 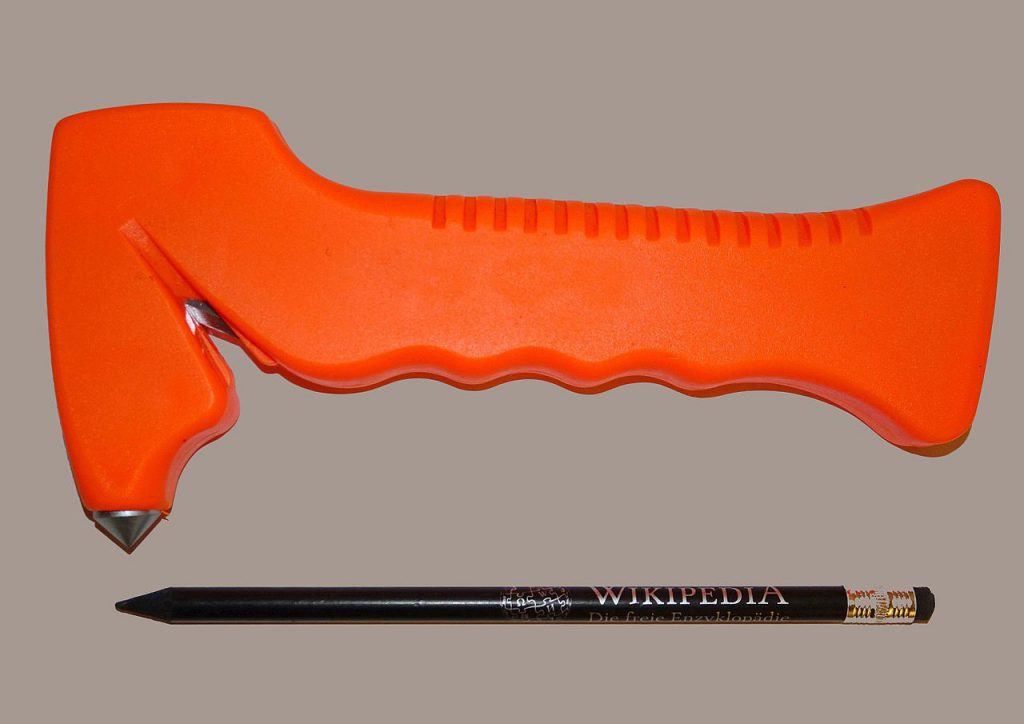 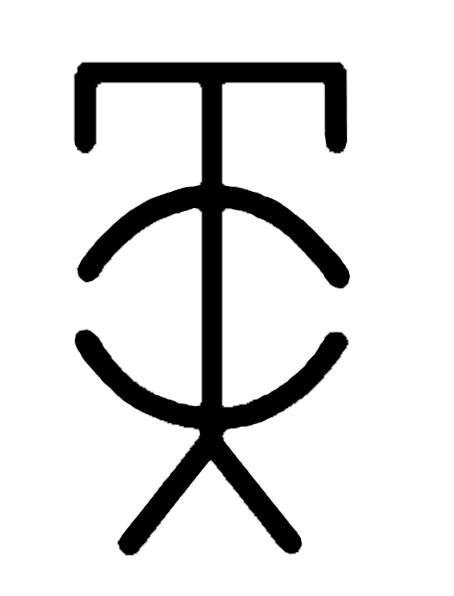 Producer’s Mark on the Knife for Cutting Clothes and Boots of the Wounded. NML Medical Museum, N 1205.

Does someone, perhaps, recognize the mark?