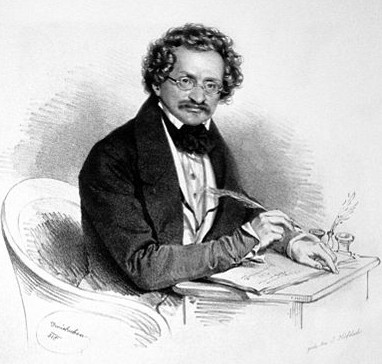 Moritz Gottlieb Saphir (1795 Lovasberény -1858 Baden bei Wien) begun his rabbinic studies in Bratislava, but at the age of eleven, after falling out with his parents, continued in a yeshiva in Prague. In the Bohemian capital, he became acquainted with contemporary culture as well and after a few years left the intended carreer for the study of modern languages and literatures. In Pest, where he went to study Greek and Latin, he published first critical and satirical articles. In 1821 he started writing for the Wiener Theaterzeitung, but made many enemies both in Vienna and at his next place of residence in Berlin. A satirical poem (1828) about the sopranist Henriette Sontag earned him a short stay in prison.  (A sad irony: Henriette Sontag succumbed, in 1854 in Mexico, to cholera.) In 1827, Saphir left for Munich, founded the literary magazines Der Bazar and Der deutsche Horizont and, having returned from a short exile in Paris, lived in Munich through the 1830s cholera epidemic- In the first volume of Der deutsche Horizont  he published the caricature and short description of the „Cholera Präservativ-Frau“, which mocked the response to the fear of the epidemic and the infinite supply of „patent“ protective instruments the ill – and the healthy – resorted to, dreading the spreading, unstoppable disease.  Saphir returned to Vienna in 1834, finally – after three years – gained permission to publish Der Humorist and in 1848 took part in the revolutionary movement. His political engagement was, however, short and to the younger generation, his 1850s texts appeared fearful if not reactionary.