The history of acupuncture may have begun several thousand years ago, but its date of origin cannot be precisely ascertained. The method came to full bloom in 7 century China, when acupuncture became an independent field of traditional healing and, during the next 100 years, spread across Eastern and South-Eastern Asia. Only in the 17 century did Christian missionaries bring acupuncture to Europe: in 1731, Lorenz Heister mentions it in his surgical textbook, Chirurgie, in welcher alles, was zur Wund-Artzney gehöret… gründlich abgehandelt werden. The popularity of acupuncture in the 20 century has been due to its promotion by the authorities: the Chinese Communist Party repudiated the method first, but later came back to it and advertised it as a „Chinese national treasure.“ In the 1960s, the method then began to thrive in Europe too.

The history of acupuncture in Czechoslovakia is relatively long. In 1839, dr. Josef Krziwanek, later physician to the Lobkowitz family, defended a dissertation on electricity in medicine, in which he addressed acupuncture, perkinism as well as massage. References in the Czech medical journal, Časopis lékařů českých, show that physicians in the Czech lands were aware of the method in the 1870s. First applications of the method date to the 1920s, when Edvard Cmunt, Professor of Balneology at the Czech Medical Faculty in Prague, used it to treat patients with rheumatic diseases. In the 1930s, physicians at the Prague Propaedeutic Clinic (Professor Bohumil Prusík) experimented with acupuncture as well. 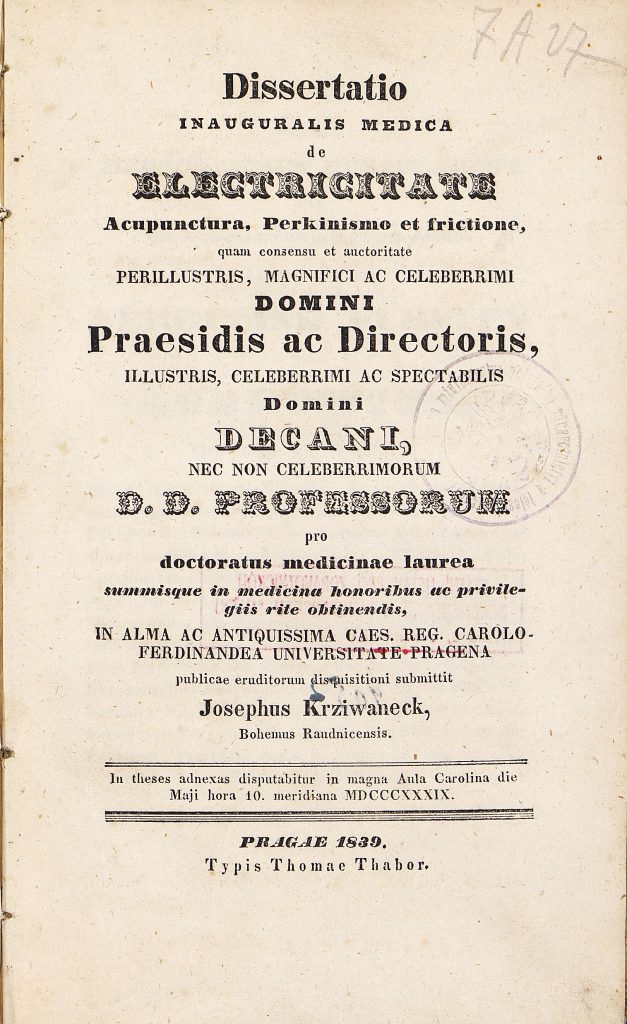 After a long pause, acupuncture reappeared in Czechoslovakia in early 1960s. Among its pioneers were neurologists Professor Josef Vymazal (1927-2014), who encountered acupuncture during a study stay in China and started to practice it at the Prague Clinic of Neurology, and Ass. Prof. Milan Tuháček (b. 1925). Together, they published a book Akupunktura : teoretická i praktická studie se zaměřením k neurologii [Acupuncture: A Theoretical and Practical Study with Focus on Neurology] (1965). No less important has been the work of dr. Richard Umlauf (1930-1999) at the Military Hospital in Ružomberok (Slovakia), where he organized the first national conference on acupuncture in 1965. In the mid-1970s, he became Chair of the newly founded Acupuncture Department at the Faculty Hospital in Brno-Bohunice and in 1974 he organized the first acupuncture training course in the Czech lands.

Also in the mid-1960s, dr. Václav Kajdoš (1922-1990) began publishing articles on acupuncture in the Praktický lékař [General Practitioner] journal. In 1974 he published Kovem a ohněm [With Metal and With Fire], the first book presentation of Chinese traditional medicine to the wide public, and in 1985 Základy tradiční akupunktury [Foundations of Traditional Acupuncture], a textbook for the professional audience. Another Czech specialist, dr. Radomír Růžička (b. 1932) contributed much to improving the position of acupuncture in Czech medicine as the author of multiple books and a set of poster maps Topografie bodů tělesné akupunktury [Topography of Physical Acupuncture Points].

The legal standing of acupuncture was regulated by a January 1977 decree published in the Věstník ministerstva zdravotnictví [Ministry of Health Official Gazette].  According to the decree, “acupuncture can be practiced by physicians who have trained in a clinical discipline… and passed special training at an institution accredited by the Ministry of Health.”

A break in the reception of acupuncture appeared in the late 1980s: the year 1988 saw the publication of a long awaited book by dr. Josef Jonáš (b. 1945) on Eastern medicine Křížovka života [The Crossword Puzzle of Life], which has been reprinted many times since and translated into several languages.