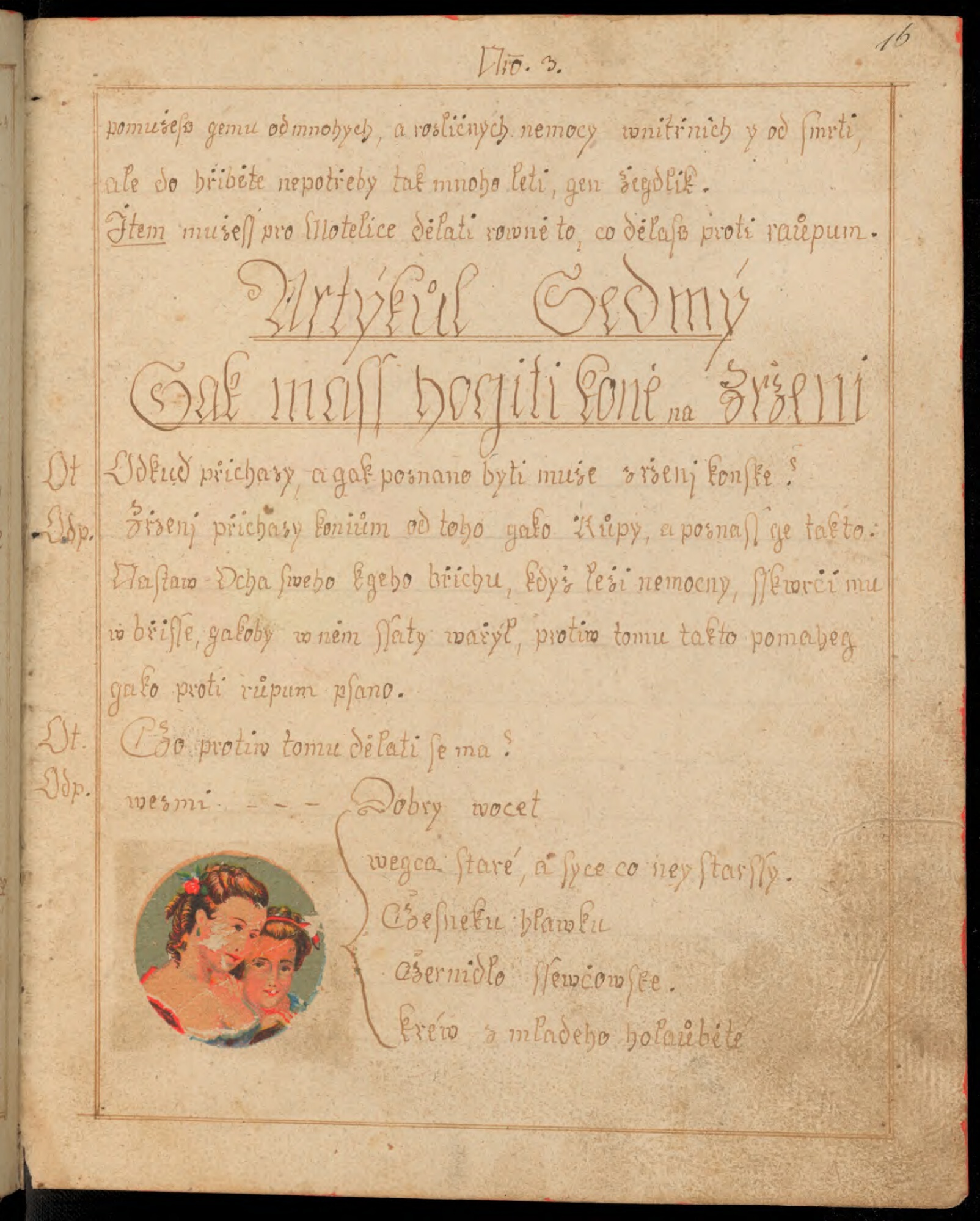 The National Medical Library Rare Prints Collection, held in the Medical Museum, includes a number of manuscript texts on both human and veterinary medicine. Transcriptions of medieval and early modern recipes are often complemented from other sources and empirical knowledge of readers and copyists. The anonymous manuscript on Equine Medicine is dated 1668: it may, however, be a later copy of a 17th century text. Its 36 articles, often dialogical in form, prescribe treatment of various horse diseases, from strangles and glanders through intestinal and skin parasites, to arrow or bullet injuries. Some of the recipes are found in medieval translations of the manual of horse medicine associated with Master Albrant, the farrier at the court of Frederick II of Sicily (originally also in 36 chapters), others can be traced to 17 and 17 century printed veterinary books. Yet other recipes refer to equestrian experts among 16 century Bohemian nobility, suggesting originality and local origin: the names listed include Cenek Dasicky of Barchov and Veltruby (+ 1568), Vilem Malovec the Elder (the Royal Tax Collector, + 1617), Jaroslav Trcka of Lipa (+ 1588) or Jindrich Zaimac of Kunstat (+ 1520). In the 19 century, the manuscript decorated with paper decals.

The original owner of the book was Frantisek Banovsky, a blacksmith in the Moravian town of Otrokovice, of whom, however, no more is known. In the second half of the 19th century it came into possession of Josef Mikeš (1845-1924), a janitor at the Napajedla castle, and probably remained at the castle after his death. The countess Marie Baltazzi- Stockau sold the insolvent estate to the Bata shoe company in 1935 and much of the mobile property was auctioned off. Among the buyers was Dr. Josef Kapp (May 18, 1888 Napajedla – October 1944 Auschwitz), a dental specialist from Brno and, in the mid-1930s, one of the founders of the Jewish museum in Nikolsburg. In the time of rising antisemitism in Czechoslovakia in 1938-1939 he donated the manuscript to the newly founded Medical Museum in Prague, perhaps in the hope that the book survive the looming Nazi devastation. The manuscript was recently restored and digitized and scholars can access it both through the NML Digital Library and at manuscriptorium.com.

Article 7: How to treat intestinal colic?

What are the causes of equine colic and how is it to be treated? The origin of the colic is the same as that of the [pin]worm, and this is how one recognizes it: Place your ear on the belly of the horse, when it lies sick and his belly rumbles as if laundry were boiled inside: what helps against the worm, helps here as well. Take good vinegar; Old eggs, the older, the better; A head of garlic; Black vitriol; Blood of a young dove. Mix everything together and pour down the horse’s throat; lead him to the sheepfold and let him walk till he passes the water, and he shall be well.

Item, just as you treat the worm or pinworm [Article 5], treat the colic as well.