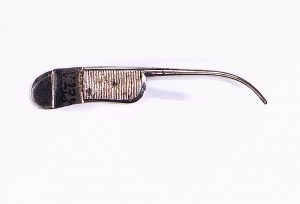 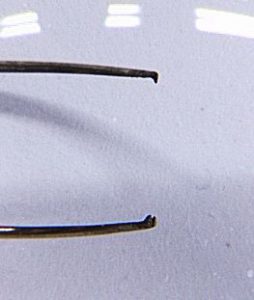 The small iris forceps, used above all for surgical creation of an artificial pupil (coromorphosis) was designed by Professor Johann Nepomuk Fischer (1777- 1847), the founder and the first Chair of the Ophthalmological Clinic in Prague (1818). In these days, the Department of Ophthalmology of the First Faculty of Medicine, Charles University and the General University Hospital in Prague celebrates its bicentennial.
Prof. Fischer wrote in his textbook of ophthalmology (Klinischer Unterricht in der Augenheilkunde, Prague 1832): „In most of the blind patients [suffering from closure of the pupil with lymphatic concrements, or symphyses between the anterior iris surface and the cornea], [who later] healed, I performed iridectomy. When the new pupil could be placed in the inner eye corner, my forceps, whose whole, slightly bent handle I hold between the thumb placed beneath the nose [im Nasenwinkel] and the forefinger, was of very good service. This forceps, of somewhat more robust construction, can serve other purposes as well, namely removal of foreign bodies in the eye. (Other instruments used in ophthalmic medicine could and should be much shorter, much smaller as well!)”
The short forceps and a curved lancet allowed Fischer to operate on the nasal side of the eye, where the ridge of the nose may stand in the way of longer, direct instruments. The surgeon pulled the forceps through short incision in the cornea, grasping the edge of the iris and cut part of the iris off. Such artificial iris, however, did not change its perimeter with the intensity of light. Later, Fischer’s successor at the Prague clinic, Professor Ferdinand von Arlt (1818/1887) employed and modified the Fischer forceps. Both forms were used until recently, although the “colibri” forceps in use today, designed by the Spanish ophthalmologist Jose Barraquer (1918-1998) are significantly more subtle.