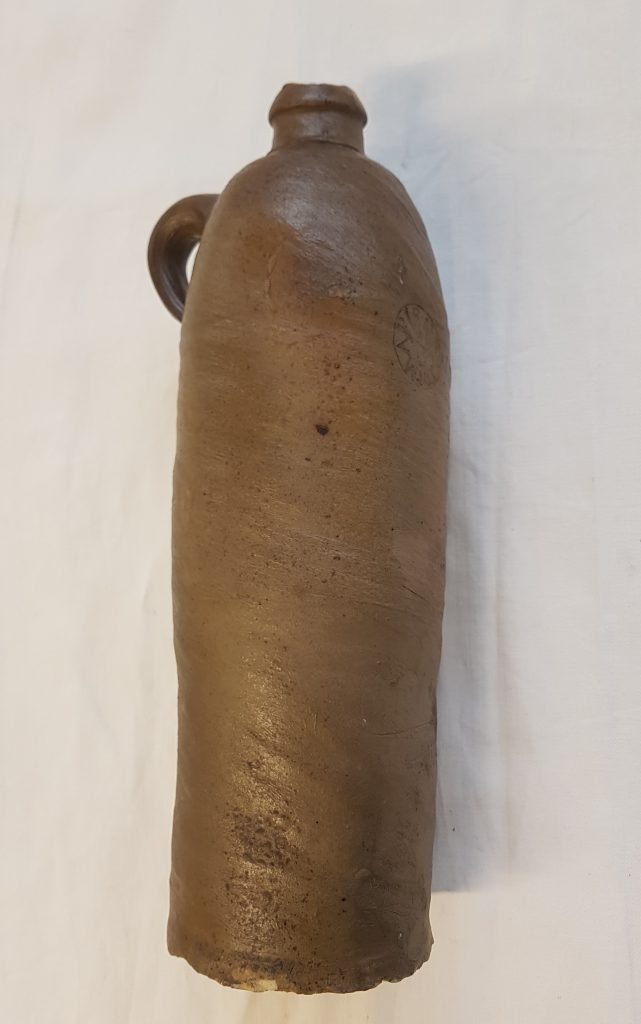 For the sultry August days we chose a vessel for distributing water: a commodity indispensable to life. Neither the interest in the medical properties of water, nor the enthusiasm for spas begins with modernity: we only need to recall the baths of the Roman era or the central place of water in medical theories of antiquity. The delivery and sale of mineral water is, however, a highly modern phenomenon. The interest in spas and mineral waters grew in the 16 and 17 centuries: cleanliness, physical and moral, became a primary value and remained one, in various forms, to the present day. Beneficial qualities of water from specific sources came to be substantiated by science.

Spa visits were increasingly popular, but for reasons of distance or of price beyond reach of most people. In his book Neuw Wasserschatz (New Water Treasure) published in 1581, Jacob Dietrich (Tabernaemontanus, 1522-1590) recommended delivering water from the springs of Selters (in Hesse, the place that gave the name to Seltzer water) in earthenware vessels closed with leather and wax to distant customers. Selters water was soon exported as far as Russia, Scandinavia and North America. On a smaller scale, water from the West Bohemian Slatina (Schlada) was bottled and distributed across the Egerland area and since mid-17 century, to Prague or Vienna as well. The watertight pottery, glazed by salt and fired at high temperature, was both sturdier and cheaper than glass. The Eger tinsmiths made grooves on bottlenecks to fit tin caps. The bottles were then sealed with wax. Cork stoppers were introduced in 1725, but they replaced the tin caps only in the 1770s.

The water springs around Auschowitz, the area where Marienbad was to be established, were discovered by monks from the Norbertine monks from the Tepl (Teplá) monastery who attempted – without success – to derive salt from the water. The local water sources– such as the Cross or the Ferdinand Springs – contain primarily sodium sulfate (Glauber’s salt or “Tepl” salt) with laxative effects. After two fires that befell the monastery and the plague epidemic that stroke the whole country in the second half of the 17 century, the springs fell to oblivion. Potential patients started coming to the Tepl area in the early 18 century. On the suggestion of the convent physician Curtius, the Abbot Raimund Wilfert (+ 1724) had the path from the Hammerhof manor for ill monks to the springs cleared and the salty (later the Cross) spring sanitized. In 1724, the water was first delivered to the monasteries in Plass and Kladrau. The main commodity provided by the springs remained, however, Glauber’s salt, sold for medical use from the 1740s. Spa treatment was given locally, primarily to monastics.

Marienbad water came to the market relatively late. In the early 1800s, the time of the first spa saisons, water was still distributed in the vicinity above all. In 1818, the year when the settlement obtained the official status of a public spa, the Inspector of the Springs, Wendelin Gradl (1787-1825) from the Tepl Monastery began bottling Cross Spring water into earthenware and glass (hyalith) vessels. Gradl established depots in Prague and Vienna. Franz Sartori (1782-1832) recommends the Marienbad springs with enthusiasm for the cure of digestive and intestinal complaints, pointing out that the water is not only comparable with that of Carlsbad, but „ suited for distribution and enjoyment in faraway lands, as opposed to the Carlsbad Sprudel, whose water loses its Warmstoff (phlogiston, the substance causing heat according to the chemistry of the time), responsible for the strong effect of the Carlsbad spring.“ In 1818, 75.000 bottles were distributed: in the following year the number doubled and by 1850 exceeded half a million. Already in 1822, 62 merchants in 42 cities and towns carried Marienbad water. In Prague, the water was offered by the August Biedermann and Franz Kunerle store in the “Drei Schwerten” house in Celetna Street. The majority of the water came from the Cross Spring, later from the Ferdinand and the Forest Springs, while water from other springs could be ordered. In 1819, a filling shed and distribution office (Füllschupfe) was erected close to the Cross Spring. The vessels were tested with water, filled from the spring using special iron tongs that clasped the bottle neck, corked and wrapped in linen. Corks, fastened with pitch, were covered with a piece of leather bound with a string and sealed. Beginning in 1850, waterproof tin lids (Kapseln) patented by Louis Vetter (1816- 1866) of Nuremberg, replaced the leather covering.

The shape of Marienbad bottles corresponds to the time when they were used. In the 19 century, earlier bulbous, quadrilateral vessels, known from the Rhineland or from Franzensbad were replaced by slimmer, round bottles. Bottles were stamped by the Tepl monastery seal with three pairs of antlers –the coat of Hroznata, the 12 century founder of the monastery – circumscribed by the name „Marienbad.“ Some bottle stamps include the potter’s initial alongside the mark of origin.

Initially, the bottles were made by the potters of nearby Kinsberg, Eger, Hatzenreuth and Ernestgrün, but in 1820 the monastery had adapted a forge in Flaschenhütte as a pottery kiln. The kiln’s first tenant, Johann Arnold, hailed from Hillscheid in the Rhineland, the oldest German area of mineral water production. He was succeeded in 1841 by the Kinsberg bottle maker Johann Michael Hartfrom a family that had provided bottles to Franzensbad and other Egerland springs since 1730s. After the latter’s death in 1861, his son of the same name inherited the workshop, which was abolished in 1873-1874. The main building was torn down at that time, the rest of the workshop burnt down in the 1920s. The area included many other kilns, old and new, but even in Austria and Germany, where earthenware bottles long remained popular, glass became the material of choice in the 1870s.

The collectors’ interest in mineral water bottles dates to the 1970s. Late in that decade, first extensive exhibition of these vessels took place in Germany. In Czech collections, they are found primarily in the West Bohemian museums, in cites with spa traditions: in Marienbad, Franzensbad, Bilin, Teplice or Duchcov (Dux). They belong to the richest objects in the NML Medical Museum pharmaceutic and balneological collection as well. 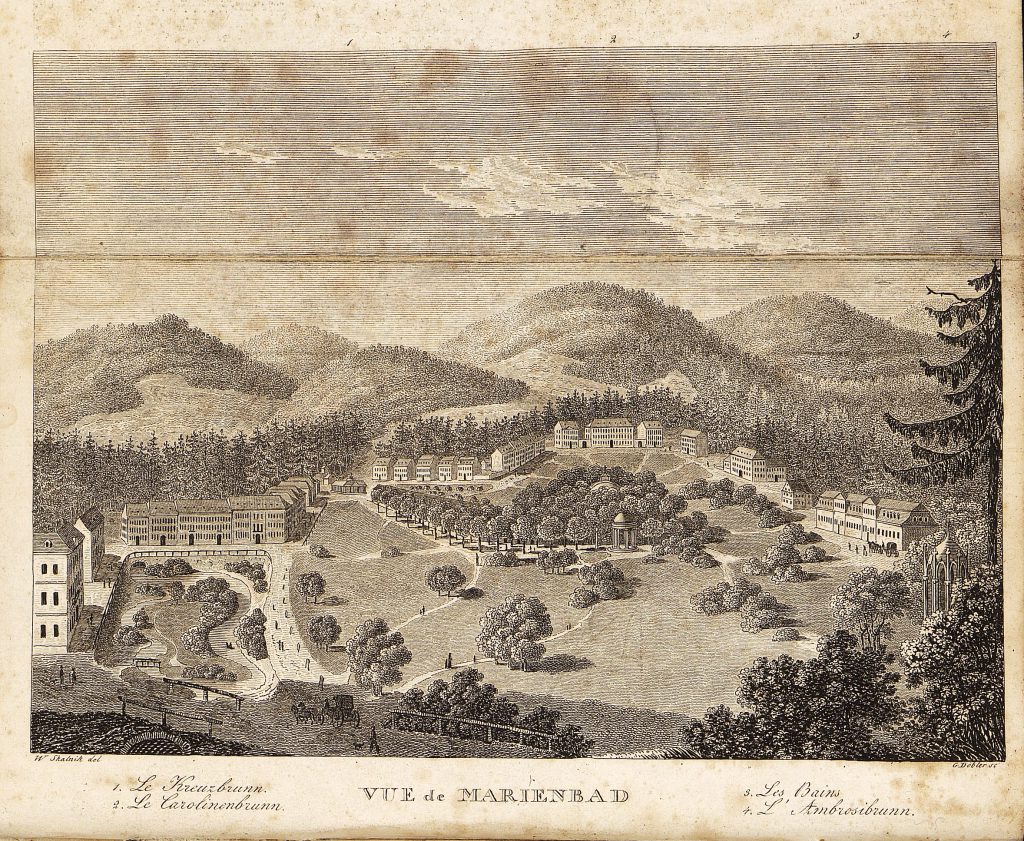 Franz Sartori, „Was nennt man in Marienbad den Kreuzbrunnen? Wo liegt er? [What is the Cross Spring in Marienbad? Where does one find it?] Erneuerte vaterländische Blätter für den  österreichischen Kaiserstaat 49 (19.6.1819), 193-195, from Sartori, Taschenbuch für Marianerbads Curgäste oder vollständige Beschreibung dieses Cur-Ortes und seiner Umgebungen in topographischer, pittoresker, geschichtlicher, naturhistorischer und medizinischer Hinsicht [A Guide for Spa Visitors to Marienbad, Or, A Full Description of this Spa Site and its Surroundings In Regard To Topography, Appearance, History, Natural History and Medicine] (Wien, Prag und Karlsbad: Haas, 1819)