Object of the Month: November 2019

The portable single channel electrocardiograph Biocard was developed by Chirana Stará Turá in the second half of the 1970s. The international competition and rapid privatization of industry after 1989 put a stop to many promising research and production programs: another project terminated in Stará Turá was the Spireta resuscitation apparatus. Biocard was sold between 1980 and 1992 and it was followed by no similar device.

Biocard was designed by a team headed by Ing. Jozef Pilát in Stará Turá. At the time, development of EKG in Chirana was provided by the Medical Technology Research Institute a Brno, a component of the Chirana syndicate. During testing of the miniature EKG Chirastar 11 developed there serious problems arose and the management of the factory sought replacement for the portable EKG Startest I, manufactured since the early 1970s. (Startest itself displaced the single channel Unicard from 1965.) In the meantime, the supply of component parts changed (with more imported parts becoming available) and more of Chirana production was designed for export, both within the Eastern bloc (USSR, GDR and other countries) and beyond. (In 1985, 44% of production was exported, 12% outside the socialist countries.) Single channel EKG reads voltage values from individual leads successively and records them on heat-sensitive paper. Aside from Biocard Chirana produced in the 1980s, the three channel portable EKG Chirastar 32 and the sizable six channel polygraph Chirastar 60 with extensions for reading the EKG curve as well as mechanical heart sounds, changes in the volume and flow of blood (rheography), intracranial pressure and pulse.

Chirana introduced the new device, together other new instruments, at the International Engineering Fair in Brno in 1978. Small volume and weight designated Biocard for field work above all, for ambulance cars, factory surgeries, home appointments, first aid stations as well as sports medicine. Compared to Startest, Biocard had wider bandwidth, it was more resilient to external interference and defibrillation shocks and easier to operate and to repair. Its appearance changed as well: the designer Jozef Havlík (1937-1990), who also devised the popular Mikrolux, Uvir and Sirius tanning lamps from Chirana Stará Turá, chose an irregular polyhedron instead of a cuboid, in bold blue and white rather than unobtrusive bluish grey. The instrument was tested in the Research Institute for Medical Electronics (since the 1960s the principal institution of Czechoslovak medical technology), at the 2nd Medical Clinic in Bratislava or the District Health Administration in Opava. More than 10 000 Biocards were produced until 1992. Biocard was part of the equipment at medical institutions ranging from the Intensive Metabolic Care Unit of the Prague IKEM research institute, the Emergency services in Brno to village policlinics.

After the radical political changes of 1989, the range of products made by Chirana was curtailed and the development and production of electrocardiographs and other instruments terminated. The last EKG from Stará Turá was the 1992 Chirastar 34, an improved Chirastar 32 model with new components and plastic, rather than shop-made metal casing. Chirana was privatized in 1993 (in the first wave of the coupon privatization) and its component factories became independent. In 1998, the new Chirana-Prema Corporation in Stará Turá went bankrupt, resulting in separation of the traditional gas and water meter and injection syringe plants. The manufacture of anaesthetic and respiratory equipment and dental technology survived and continues under the Chirana title today.

The oldest electrocardiograph in the NML Medical Museum collection 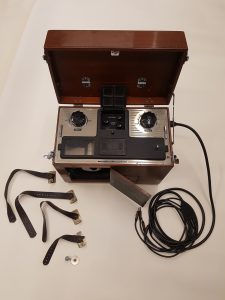 For information and memories regarding the production of electrocardiographs in Stará Turá, we are thankful to ing. Jozef Pilát.