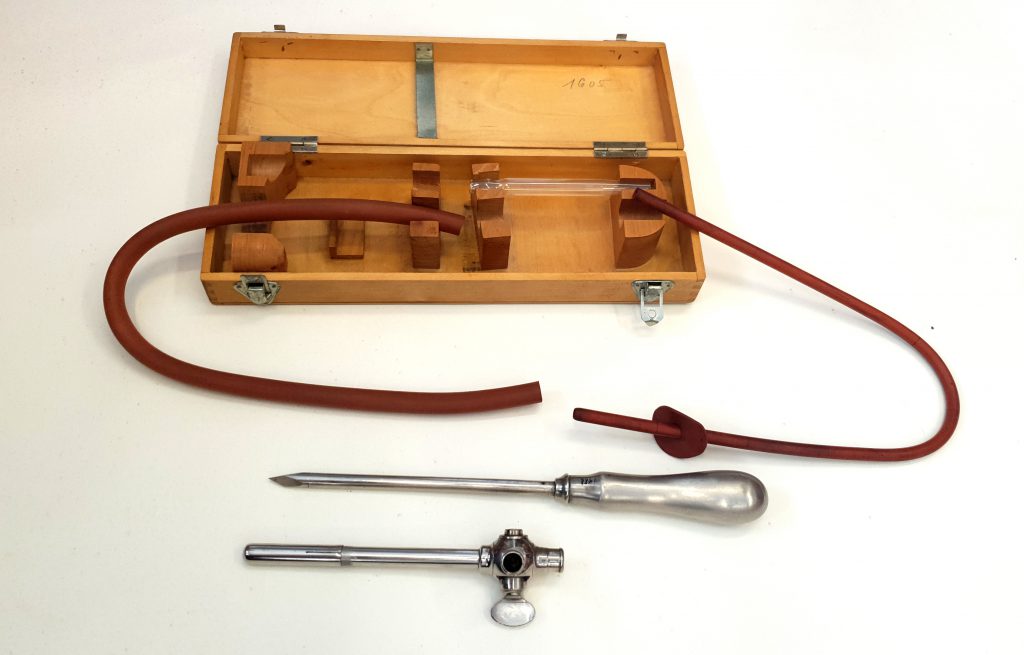 COVID 19 is no flu. Yet the way it harms, the way it spreads and the way in which we try to protect ourselves, are not very different from the „Spanish Flu“ of the early 20 century. In 1869, a Hamburg physician designed a technique to help people with influenza-related pneumonia, a complication that killed flu patients in 1919 and answers for the death of thousands of coronavirus victims today.

The „Spanish Flu“ pandemic of 1918-1920, caused by the H1N1 influenza virus, infected a third of the world population and killed as many as 50 million people. One cannot overlook the many similarities between the „Spanish Flu“and the present COVID 19 pandemic. True, the disease agent differs, as does the population group most severely affected, and the means of therapy and prevention available today could not be dreamt of in 1919. Yet the avenues of infection, the patterns of dissemination, the suggested – and ridiculed – protective measures, such as protective masks, school closings and restrictions on interpersonal contacts are all alike: as are the secondary infections that affect and kill patients afflicted and weakened by the virus.

The victims of „Spanish Flu“ died predominantly of bacterial pneumonia, often followed by purulent pleurisy. In a 1918 lecture, Martin Mandelbaum (1881-1947) compared the influenza infection to a poisoned arrow: „influenza is an arrow head that wounds; the secondary infection is the poison that makes the wound deadly. “ The primary infection with a yet unknown, highly infectious microorganism damages vessels that provide lung tissue with oxygen; the tissue saturated with blood is easily populated with harmful bacteria, causing complications that kill the patient. In the case of COVID-19, the proportion of such infections appears somewhat lower: a study executed in Wuhan showed secondary bacterial infection in 50% of victims. Many of these patients carried pneumococci in their bodies before being infected by the virus; many others encounter bacteria, resistant to antibiotics, in hospitals, when weakened by the influenza.

The rise in pneumonia cases during the 1918-1920 pandemic raised the question of the proper therapy of chest empyema, collection of pus in the pleural cavity. The controversy opened primarily between internists and surgeons, but the physicians on different sides of the global conflict and even in different departments of the same clinic disagreed as well. Therapy of empyema begun with repeated punctures of the chest cavity, but if these did not remove enough pus, further procedure was controversial. Since the 1860s, surgeons tended to proceed radically, opening the chest, resecting one or more ribs and drain the open cavity with wide India rubber catheters. (Resection of a healthy rib in a case of empyema was first recommended and in 1865 performed by the Marburg surgeon Wilhelm Roser and the method was accepted at clinics across Germany and Europe.)

Specialists in internal medicine preferred siphon drainage, using an apparatus devised in 1869 by the Hamburg physician Gotthard Bülau (1835- 1900). The set consists of a metal trocar with a cannula and a puncture needle, a rubber catheter, connecting hoses and a bottle to be one-third filled with boric acid or salt solution. The doctor punctured the chest wall and the pleura and using the trocar, placed the catheter, closed with a clamp, in the aperture. Having removed the cannula, he affixed the catheter with a patch, placed its other end under water level in a vessel and removed the clamp. The pus issued from the chest and flowed down to the vessel placed at the patient’s bed side, but air could not enter the chest, cause pneumothorax and oppress the lung. The chest was usually drained for about two weeks.

The Bülau method had better results in younger patients and in early pleurisy with rapid increase in the amount of thin pus. During a longer lasting pneumonia, fibrin threads form in the chest, clots blocks the catheters and fibrinous tissue must be removed surgically.  Most influenza patients were between 15 a 30 years of age and the illness proceeded quickly, allowing doctors to diagnose pneumonia at an early stage. However, siphon drainage had faults of its own. The physician did not see inside the chest, working on account of percussion, auscultation and puncture results. To surgeons, the improvement appeared slow, with fever abating only in the course of days.

Head physician in the Rudolfinenhaus in Vienna, the surgeon Ludwig Moskowicz, proposed combining both methods at a January 1919 meeting of the Society for Internal Medicine. An aspirator or a water vacuum pump accelerated the evacuation of pus. A wide opening could be made in the pleura after opening the chest and a Bülau set affixed. Moskowicz himself attached two catheters to the opening made by removing a rib, placed their opposite ends in closed bottles, filled one of the bottles with salt solution and raised it above the lying patient. The solution ran through the pleural cavity and out into the other bottle. Both catheters were then placed in a vessel and the drainage continued.

We have little data on the precise proportion of siphon drainage and rib resection in treating flu empyemas in the Czech lands, though it probably varied at different clinics. Writing on diagnostics and therapy of influenza-related empyema at the Czech Surgical Clinic in Prague, Josef Bárta (1888-1949) does mention Bülau’s drainage, but only to declare that „in our department, rib resection was carried out on all patients that gave their permission.“ These patients did, however, contract the flu several weeks before the operation. A textbook of Surgery published in Prague in 1921 is no less sceptical about the method. How did, however, Prague internists approach empyema? Physicians at the German Internal Clinic (Professor Rudolf von Jaksch) were enthusiastic about Bülau’s technique since the 1890s and unlikely to abandon it by 1918, but there is no published material from the Spanish flu period.

During the 20 century, the treatment of empyemas evolved and improved in multiple ways. First techniques of artificial lung ventilation date to the early years of the century. New models of vacuum pumps were developed, catheters of Indian rubber, difficult to sterilize, were replaced by red rubber devices and in the 1960s, first plastic disposable catheters. Bülau drainage continues, however, to be part of surgical treatment of a number of chest diseases. 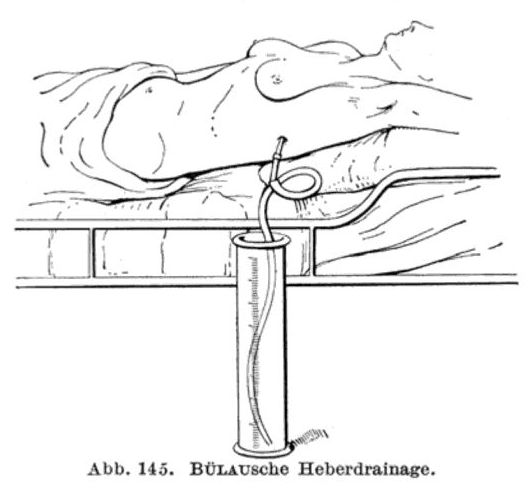