High body temperature signals illness, usually an infectious disease. Today, thermometer is often the first instrument to detect COVID-19. Contactless digital thermometers and infrared cameras help recognize people who may be affected at airports or borders. First instruments for measuring body temperature emerged in Italy at the turn of 16 and 17 centuries. Physicians, however, began regularly taking temperature only 250 years later. Since mid- 19 century, the fever thermometer found its way from hospitals and doctors‘ offices into the medicine chests and kitchen drawers in our homes.

The Medical Museum  instrument collection includes several dozen medical thermometers dating from late 19 century to the present day. The oldest, a Leyser thermometer with a plaster plug covered with a leaf of brass and a vertical scale from 22 to 45°C, was made around 1870. Others come from the early 20 century. Several are the work of Czechoslovak, Austrian and German manufacturers of the pre-war period. A military thermometer from the late 1940s or the famous 1970s rychlobezka (an instant thermometer for babies) represent Czechoslovak production after 1945. Contemporary mercury- free and digital thermometers are included as well.

The works of Hippocrates and Galen do address fevers, but for the medical writers of classical antiquity, quality rather than quantity of fever was relevant. Externally, fever is expressed by the speed of pulse. Skin temperature is only an effect of internal warmth. With the touch of his hand, physician cannot recognize the inner temperature of the body, the heat or the cold experienced by the patient. This conception remained current until the modern time and was not affected by the invention of the thermometer.

Galileo Galilei (1564-1642) is credited with the invention, in late 16 century, of the air thermometer (thermoscope). A glass tube with a heated bulb filled with air at the top is inserted in a vessel with water at the bottom. As the air in the bulb cools and contracts, colored water enters the tube from the vessel. The results are, however affected by changes of the surrounding air pressure. Galileo’s associate, the physician Santorio Santorio (1561- 1636) had a patient hold the b 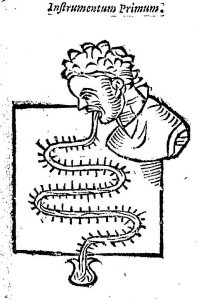 ulb or put the tube inside the mouth and measured the fall of the water level during a set period of time. In this way, he could follow the rise or fall in fever and, if he took the patient’s temperature in advance, compare temperature in sickness and in health.

First closed alcohol thermometers were made in Florentine glassworks around 1650. In the early 18 century, the Dutch instrument maker and physicist Daniel Gabriel Fahrenheit (1686-1736) started filling thermometers with mercury, a liquid that expands most regularly with rise in temperature. During the next century, many scientists set extreme points and division of the scale in a way that allowed comparing results achieved in various places and at various times. The Fahrenheit and the Celsius scales remain in use till the present day.

Herman Boerhaave (1668-1738) used Fahrenheit’s thermometers to take body temperature. His concept of fever, however, remained indebted to Galenic medicine. Thermometer was to be used only when the inner perception of heat corresponded to the heat palpable on the skin. „Feverish heat is detected externally with the thermometer, internally from the sensation of the patient and red color of urine. “ In mid- 18 century, Anton de Haen (1704- 1776) begun recording temperatures in the Vienna city hospital, the Bürgerspital. He found that male and female body temperature did not differ; that old people are not – as Hippocrates had claimed – colder than the young and above all, that during cold ague temperature does not fall, but rises. The founder of hydrotherapy James Currie (1756- 1805) set the course of treatment according to the patient’s temperature. Cold water was used to treat typhus fevers (epidemic typhus) only when the „real“– i.e., measured – temperature exceeded normal values.

Systematic taking of temperature, however, begun only in mid-19 century at the internal wards of large European hospitals. Ludwig Traube (1818-1876), head of the lung department in the Berlin Charité, and especially Carl Wunderlich (1815-1877), Professor and Chair of the University Hospital in Leipzig, became pioneers of medical thermometry. On the basis of several million measurements of 25 000 patients taken between 1850 and 1868, Wunderlich established 37° C (98, 6° F) as the normal adult temperature, ranging between 36, 5 and 37, 5° C. He stipulated that temperature above 38°C is „always suspect and usually“ shows fever. The curve of temperature in the course of an illness suggested both diagnosis and prognosis. Wunderlich found “typical temperature curves“ in typhoid fever, epidemic and recurrent typhus, as well as smallpox, measles or scarlatina. The course of other diseases was less regular, but even there „typical“ curves occurred. In a series of articles and the book Das Verhalten der Eigenwärme in Krankheiten (On the Temperature in Diseases, 1868) Wunderlich described the curves of many diseases from the rise at the onset of illness and subsequent fluctuations to cooling and recovery or agony and death. Wunderlich used Leyser’s thermometer to take readings and probably participated in designing it.

Many early 19 century thermometers were manufactured in French glass workshops. To lower prices, German thermometer makers begun using industrially made tubes. Thermometer factories developed both from glassworks and mechanical workshops. The latter were often linked to university departments, responding to the demands of scientists and making use of the innovations and the expertise coming from the academic community.
Georg Moritz Ludwig Leyser (1816-1881) graduated from the Naumburg high school in 1835 and set up a mechanical workshop in Vienna. From 1846 to his retirement in 1873 he served as the inspector of the physics cabinet at the Leipzig University. Leyser designed or participated on designing many scientific instruments, chiefly for the study of electricity and magnetism, but also microscopy. In 1851 he was granted a royal privilege for the production of air pumps (Luftpumpe). During his time at the University he began manufacturing thermometers whose reliability and low price raised interest of university departments and physicians across Northern Germany and later, across Europe. He continued production after retirement. After his death, his daughter and later his son-in-law took charge of the factory and continued marketing thermometers marked „G. M. L. Leyser“ until the 1940s.

The maximum thermometer was designed in 1866 by Karl Ehrle (1843-1917). Thermometers that continued to show the highest temperature after the instrument cooled have been developed since late 18 century, but not for medical use. Ehrle suggested a constriction of the tube above the mercury bulb: as temperature sinks, the mercury column breaks and the thermometer must be shaken to force mercury down through the stricture.

Pioneers of thermometry in the Czech lands included the dermatologist Vítězslav Janovský (1847-1925), who published an enthusiastic review of the second edition of Wunderlich’s book and described, following Wunderlich, temperature curves in various infectious diseases. Thermometer use was, however, no more commonplace in Bohemia than elsewhere. In 1878, writing about the treatment of fever in smallpox, Janovský had to note that temperatures over 40°C imply adverse prognosis, „which makes the thermometer as important in smallpox treatment as is the case with typhus. (I make this point in response to frequent objections that the thermometer is a mere theoretical toy- the thermometer has excellent practical importance.)“ Another early advocate of the thermometer, the pediatrician Josef Zít (1850-1887) introduced various designs of the instrument, as well as locations and procedures of its use, in his 1884 dissertation on thermometry in children. In the mid-1880s – writes Zít – „the medical sciences advanced far enough that, I suppose, no physician would deny the importance of thermometry, regarding certain diseases in particular.“ Temperature curves in children had not, however, become the object of study. Most temperature studies took place in hospitals, but there were few pediatric wards and children are, at any rate, treated at home unless their state is serious. Taking a child’s temperature at home has its own pitfalls: children are afraid of the thermometer and cannot stay at rest for the necessary time. From the available thermometers, Zít preferred Ehrle’s and Leyser’s instruments.

Around 1890, the Wilhelm Uebe factory in the Saxon town of Zerbst began producing oval, completely enclosed glass thermometers that could be sterilized by heat. This shape, common today, became routine early in the 20 century, but the older cylindrical thermometers, plugged with plaster and metal, remained available for years.

At the end of the century, thermometry became a regular part of the hospital regime. In hospitals, nurses 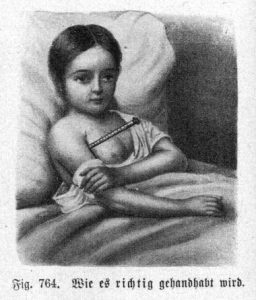 increasingly assumed the time-consuming work of temperature taking.  Doctors in private practice began to use the thermometer too, leaving one instrument in the patient’s home and entrusting further measurement to the patient or his family. The increasingly common recording of temperature of children– often carried out by the mother – contributed to the spread of the thermometer to people’s homes.

As the thermometer passed from the hands of the specialist to the hands of the general practitioner, the nurse and the general public, its shape changed as well. The scale shortened to the common range between 35 or 36 and 42° centigrade. Horizontal scale made quick reading of the values easier. The 37° C point, the first sign of elevated temperature, was marked distinctively, usually in red. Alongside the personal scale, the thermometer became the most common medical instrument in the European or American home.