Smallpox is the first infectious disease to be fought by vaccination. Variolation, immunization against smallpox by introducing material from pustules of a patient, had spread in Europe early in the 18th century: a surgeon cut the skin with a scalpel or a lancet and rubbed the liquid into the wound. The artificially induced infection was mild and should protect from infection for life. In the 1770s, both peasants and physicians noted that people who had recovered from cowpox, a benign skin infection of cattle, were immune against smallpox as well. Inoculation using cowpox lymph was no less effective and vaccinated people could not, as opposed to those subject to variolation, spread a dangerous infection to others. The English physician Edward Jenner (1749-1823) proved the effect of vaccination in 1798. Scalpels and knives were used for both operations, but the folding thumb lancet with leaf-shaped blade and tortoise-shell handles, from the 16th century a common bloodletting instrument. The doctor or surgeon carried it in the vest pocket or in a pocketbook together with other tools, including a razor for shaving the arm before the operation.

The blade should penetrate the skin obliquely, about 3 millimeters in length. Jenner recommended two small cuts on the upper arm or one on each arm, deep enough to produce a drop of blood. The usual technique in the 19th century involved several pustules, often five, arranged in the shape of a cross. Vaccine was introduced directly by the cut or afterwards, into the open wound. The same instrument served to vaccinate and to gather the lymph. With use, the carbon steel blade grew coarse and rusted, but if covered with lymph for a long time, it deteriorated quickly. Some 19th century manufacturers supplied ivory lancets for drying and storing the material that could be also used for vaccinating small children with fragile skin. The trefoil lancets continue to appear in doctors’ armamentaria and instrument makers’ catalogues well until the 1930s.

During the two centuries between the beginning of vaccination and the complete eradication of smallpox declared in 1980, dozens of other inoculation devices and their modifications were introduced. From the early years, some doctors preferred vaccinating with a sewing needle, introduced into the skin by a rotary movement.Using a needle, held parallel to the skin and repeatedly pressed through the vaccine, was popular in the 20th century as well, in the effort to minimize bleeding. Until the 1950s, many physicians assumed – as it turned out, in error – that blood washes the virus out from the wound, prevents immune reaction and reduces the “take.”  The vaccinator presented by the Scottish physician Graham Weir in 1848 scratched the skin with four parallel needles. On the other end, these popular “combs” had a spatula or blunt lancet for collecting lymph. Other instruments abraded the epidermis by rotating needles arranged in a circle.

handle of horn, tortoise shell or wood. To remove unwanted microbes, they were disinfected by alcohol or other chemicals. Antiseptic procedures were, however, not efficient enough and new medical findings at the end of the century compelled sterilization with boiling or with flame. The advent of asepsis changed the shape of the instruments. Vaccinating lancets and needles were equipped with metal handles. Sheathing or screwing the blade inside the hollow hilt prevented contamination, as well as injury to the user or his clothes. In the 1920s, the Aesculap company offered sterile vaccination needles in sealed glass tubes. 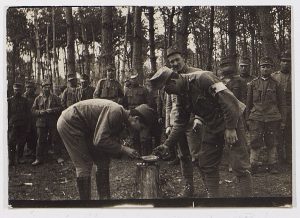 Mass vaccinations were first performed in the army. French surgeon Henri Marechal (1849-1918) designed vaccination pens (vaccinostyle) for this purpose, mounted on a pen holder. He found sewing machine needles too expensive; regular pins could not carry enough vaccine or implant it into the skin. French and Belgian armies took up his invention first; in the early 1900s they were put to use in the Austro-Hungarian army as well. Manufactured by makers of writing instruments, they resembled ink pens, curved in the middle and flat at the end, but without a slit in the arrow-shaped, sharpened tips. Pens stored in a metal container could be sterilized en bloc by boiling, to provide a supply or aseptic blades for each round of vaccination. Military hospitals used them during the World War II and up to early 1950s. Lindenborn (1848-1912) turned red hot and cooled again in 13 second, minimizing the damage. Metal-cased vaccination sets, containing several blades, a spirit burner and a glass bowl for the lymph allowed rapid vaccination of many people without waiting for the instruments to cool. Carl Hagemann, a general practitioner from Stuttgart, devised a rotating blade set with six lancets that consecutively entered flame and returned to the doctor’s hand. A small chisel of the same alloy, designed by the Austrian pediatrician Clemens Pirquet (1874-1929), introduced the vaccine in the skin by rotation. Pirquet recommended the same tool for tuberculin skin test to diagnose tuberculosis by antibody reaction. Other vaccination instruments such as needles, scalpel tips or lancets came to be used for the latter test as well. In postwar Czechoslovakia, metal lancets, Pirquet needles or repeated scratches with a sewing needle were all used for smallpox vaccination.

In the late 1960s and early 1970s, many Czech and Slovak doctors took part in the WHO smallpox vaccination campaign in Africa and Asia. Instruments employed there came to Czechoslovakia as well: jet injectors of American and later Hungarian and Soviet manufacture found use in army vaccination drives. For intradermal TBC vaccinations, other types of injectors were tested, as well as Rubin’s bifurcated needles. Vaccination against other diseases, including COVID-19, generally uses a syringe and a needle to administer vaccine into the muscle, under the skin or under the surface layer of the epidermis.