In the late 1950s and early 1960s, Czechoslovak automatic pulmonary ventilators were being developed in the Presna mechanika (Prema, Precise Mechanics) factory in Brno by a team led by ing. Jaromír Bernreiter (1916-1966). Dr. Hugo Keszler (1916-1994), the head of anaesthesiology at the Clinical and Experimental Surgery in Prague-Krč (UKECH), was among the contributors to this project: earlier, Dr. Keszler and Dr. Ladislav Démant devised the first post-war portable narcosis apparatus known as DK, which enabled the use of anaesthesia outside well-equipped hospitals. The KPT ventilator (short for pressure resuscitation device) was fabricated in several models: KPT-D for mine emergency services, portable KPT-V with gas mask and suction bottle for rapid response crews and KPT-N for hospital use. The hospital version, with a corrugated bag placed in the cylindrical glass pressure vessel, controlled breathing primarily during anaesthesia. The automatic driving mechanism could be disabled, allowing artificial respiration using a hand breathing bag. The device was tested in the Central Military Hospital in Stresovice as well as in the UKECH and was manufactured from 1962 until late 1970s. In 1968, the ventilator was redesigned: an input filter was added to eliminate dirt and other debris,  the valves were replaced by new models and noise produced by the device reduced. Its (wholesale) price rose accordingly: in May 1968, the state distribution company advertised a “special offer” of CZK 3120, in June 1969, KPT-N was sold for CZK 4350, close to the price anticipated in the early 1960s. 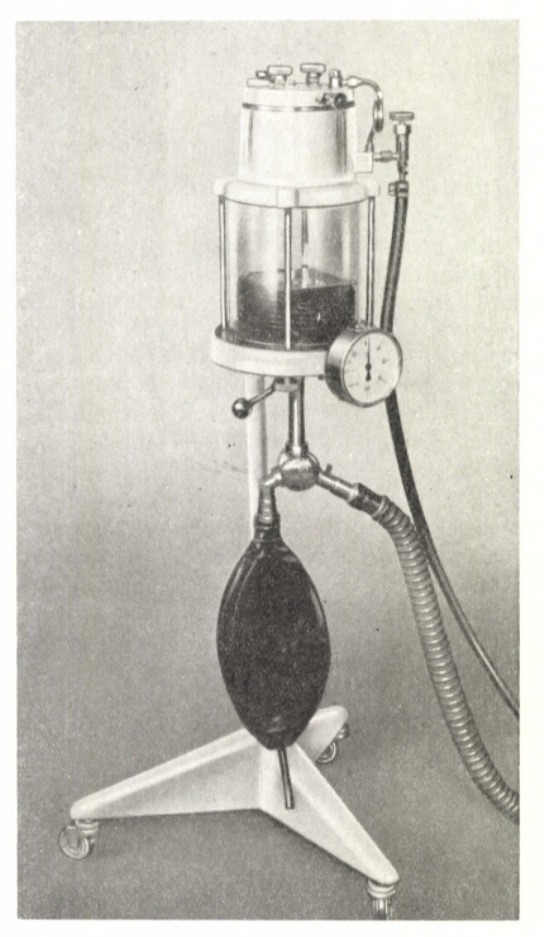